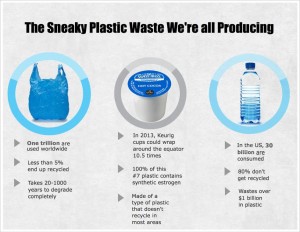 Earlier this week an article on Mother Jones highlighted a growing source of waste in American households – single serve coffee ‘cups’ used in coffee brewers like Keurig’s. According to the article, enough of these cups were sold in 2013 that they could have wrapped around the equator 10.5 times.

That’s a whole lotta trash. And specifically, a whole lotta plastic. And  most of those little cups are made of #7 plastic, which is nonrecyclable in most areas (it is recyclable, however, here in Austin).  In other words, most of those cups are going into landfills. What’s even worse is that a recent field testing of  so-called safe plastics (they’re all BPA-free) revealed that 100% of #7 plastics tested contained estrogenic activity, the very characteristic that has made BPA so controversial. From a broader perspective, virtually all plastic leaches out chemicals over time, especially in the high heat and pressure environments found in landfills. This can result in soil, water and air pollution, especially when these plastics end up in our waterways.

In other words, plastic, and specifically, the plastic waste that we individually produce, is a problem. For those of us who are not using single serve coffee cups, there are two other large culprits in our plastic waste – disposable water bottles and plastic bags.

Every year in the United States, 30 billion bottles of water are consumed. That’s almost 100 bottles of water per person living in the US. What’s more is that 80% of those completely recyclable water bottles don’t get recycled, but end up in landfills, wasting over $1 billion in plastic that could have been recycled. To cap it all off, studies have proven that bottled water is not any better for you than tap water.

The other big culprit for plastic waste is plastic bags. Every year, over one trillion bags are used worldwide. 100 billion of those are used in the US, which ends up costing retailers around $4 billion. Less than 5% of these bags end up being recycled, and it can take anywhere from 20-1000 years for the bags to degrade completely. In the meantime, they break down into smaller pieces that readily absorb and leach toxins and are mistaken for food by animals. Plastic bag bans and taxes are already taking off across the country (including in Austin), and many stores offer small discounts for bringing your own bags.

The amount of waste created by water bottles, plastic bags, and even those little K-Cups is astronomical. Not only are plastics toxic and hard to degrade, fossil fuels are required to make them, making their environmental footprint large even when recycled.  While many of our environmental challenges are difficult to grasp and often times overwhelming, one thing that each person can do is try their best to reduce the plastic waste they produce. Drink tap or filtered water from home and use a reusable (preferably metal) water bottle to refill throughout the day. Keep reusable bags in your car so you remember to use them at the grocery store. And if you own a single serve coffee machine, try and find a reusable filter to put your own bulk-bought coffee grounds in.

It’s been reported that every square mile of the ocean has 46,000 pieces of plastic in it, but each of us can control how much of that we put in there!