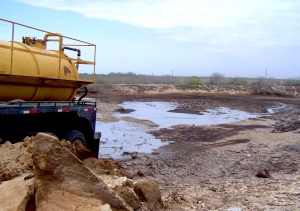 Two non-profit and non-partisan investigative journalism organizations, the Center for Public Integrity and InsideClimate News, have concluded through their joint investigation that the Texas Commission on Environmental Quality (TCEQ) and the Railroad Commission protect the oil and gas industry instead of the public whom they claim to serve.

Fred Wright and Morris Kocurek were two oil and gas regulators working for the Texas Railroad Commission who received praise from their supervisors, promotions, and merit raises throughout their careers. But they may have done their jobs too well. They were fired in 2013 for what they believe to be their insistence in making sure oil and gas operators followed the rules and regulations in place to protect the public and the environment.

Wright was responsible for determining whether oil and gas wells were up to code to prevent groundwater contamination. He was often encouraged or coerced by his superiors to bend the rules, to say that operators had met compliance standards when they had not. In 2013, his superiors told him that complaints had been filed against him by the operators claiming he was “unreasonable to work with” and “does not attempt to offer solutions to bring them in compliance with commission rules”, citing that Fred’s methods for compliance would be “costly”. Wright’s boss at the time, Charlie Teague, insisted that Write approve oil and gas wells despite the fact that they were in violation of statewide rules.

As the enforcer of proper toxic waste disposal in the oil and gas industry, Kocurek faced very similar problems. He said his bosses made it clear that he was supposed to go easy on the industry. The violation notices Kocurek filed were usually processed very slowly and follow-up inspections were assigned to the more lenient inspectors. Eventually, Kocurek realized the influence that the industry had on its supposed regulators and his reports were all ignored. Violations would disappear after the right phone calls were made.

Documents obtained from the Railroad Commission through the open-records corroborate the stories of Mr. Wright and Mr. Kocurek. Wright has filed a civil lawsuit alleging wrongful termination. He has also filed a federal whistleblower complaint. Kocurek, on the other hand, hasn’t taken any legal action and would rather forget the whole thing.

According to InsideClimate News and the Center for Public Integrity, the Railroad Commission is controlled by three elected commissioners who have accepted nearly $3 million combined in campaign contributions from the industry during the 2012 and 2014 election cycles, according to data from the National Institute on Money in State Politics. In the case of the Railroad Commission and the TCEQ, money talks and it’s louder than the voice of Texas citizens.