In an effort to defend local control, known as home rule, a group of North Texan activists traveled to Austin on Monday to lobby lawmakers at the Texas Capitol. Earthworks hosted the event, providing the transportation, education and guidance for the participants as they made plans to speak face to face with elected officials. They were joined by allies from Frack Free Denton, Public Citizen, Clean Water Action, and Environment Texas. 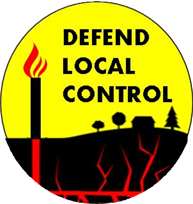 The citizen lobbyists focused on speaking to legislators belonging to the House Energy Resource committee, House Environmental Regulation committee and the representatives and senators from their districts about defending the home rule rights of municipalities.

Texas has traditionally been a strong home rule state that allows local governments to pass laws to go beyond state laws. Some of the home rule issues included: fracking bans, bag bans, and tree preservation ordinances. Citizens are particularly concerned about several bills that would work to limit home rule:

House Bill 540: (Phil King) This bill would require cities to get approval from the attorney general’s office before putting a citizen’s initiative up for a vote.

House Bill 1556: (Miller) This bill would limit certain regulations in a county, municipality, or other political subdivision

Senate Bill 360: (Estes) This bill would significantly lower the bar for what is considered a regulatory taking, remove the ability of local governments to regulate development to ensure health and safety in a variety of ways, and expand the timeframe for bringing suit when regulations are adopted. Among other impacts it would limit the ability of local government to adopt local drilling ordinances.

Senate Bill 710: (Burton) This bill would establish the parameters of a municipal government designated as a Liberty City (a new form of a general-law municipality)

Thus far, there have been many bills filled this session that could take away a city’s right to pass rules to protect the public. As a result, it is important for constituents to make their elected officials know what their concerns are when it comes to local control and how the citizens’ efforts can be better represented in the legislature.

If you are interested in learning more about local control issues, you can visit Local Control Texas for more information.