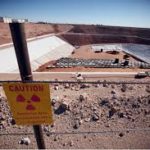 Opposed to an industry scheme that risks a proposed short-term nuclear waste storage site becoming a permanent site while sticking taxpayers for the bill, four leading national and Texas groups — Beyond Nuclear, Nuclear Information and Resource Service (NIRS), Public Citizen, and the Texas-based Sustainable Energy & Economic Development (SEED) Coalition — are calling on the U.S. Nuclear Regulatory Commission (NRC) to follow the law and terminate its review of the license application for the controversial plan by Waste Control Specialists (WCS) to construct an interim high-level nuclear waste dump in Andrews County, TX.

WCS seeks a permit to build and operate the supposedly short-term storage facility for up to 40,000 metric tons of highly dangerous nuclear waste in Andrews County, but only if the U.S. government first assumes responsibility for the waste and further agrees to ship it to the Texas site by rail. The license application is for the first 5,000 metric tons but the company’s promotional materials show they are planning on expanding the site to accommodate more than half of the estimated 75,000 metric tons of commercial nuclear waste currently in the U.S.

The groups are concerned that the “interim” storage facility may become the de facto permanent home for the highly toxic waste. Given the long battle over Yucca Mountain, the groups have zero confidence that Congress or federal regulators would have the stomach for fighting to move the nuclear waste a second time from WCS or any other “interim” site. And, with utilities totally off the hook and taxpayers footing the entire bill, those that generated the waste would have no incentive to ensure its safe disposal in a permanent geologic repository.

Available online at http://pubc.it/2eMSaXM, the letter from the four groups to the NRC’s top executive argues that the WCS proposal would require the NRC to break federal law, which bars the U.S. government from assuming responsibility for interim waste storage in the absence of a federal repository for permanent disposal. They contend that, until a long-term geological repository is ready, federal law forces utilities to solve their own interim storage problems, including bearing the economic burden for facility construction and operation, and liability for accidents.

The groups’ letter demands that NRC immediately drop its review of the WCS application, including its plans to embark on an environmental study.

High-level radioactive wastes are irradiated nuclear fuel rods, and short-term exposure at close range, with no shielding, can cause immediate death. Lesser exposure can cause death or cancer for over a million years. It is so dangerous that Congress required that it be buried deep underground in geologically isolated repository for millennia. This danger also prompted federal lawmakers to prohibit putting taxpayers on the hook for “interim” solutions that could become de facto permanent surface storage sites.

According to the groups, there is no safety imperative for moving the waste to a consolidated storage facility. The safety and security of our toxic nuclear waste stockpile, not financial gain for this private entity, should drive NRC waste storage activity.  Rather than reviewing this premature and illegitimate proposal the NRC should focus its efforts on safeguarding the onsite storage of waste at nuclear facilities across the country.

“By requiring a permanent deep geological repository to be operating before centralized interim storage could be opened, Congress wanted to prevent the very real danger of a de facto permanent parking lot dump – a nuclear waste storage site that would be designed for the short-term but be there forever,” said Kevin Kamps, radioactive waste specialist, Beyond Nuclear. He added: “WCS is a cynical shell game and taxpayers are sure to lose. Congress was right that liability for the costs of storing commercial irradiated nuclear fuel belongs with the generators and should not be shifted onto the backs of the American public.”

Diane D’Arrigo, radioactive waste project director, Nuclear Information and Resource Service (NIRS), said: “Moving nuclear power waste over roads, rails and waterways to a supposedly temporary site puts us all at risk and creates only an illusion of a solution.”

Karen Hadden, executive director, SEED Coalition, added: “Due to risks of radioactive contamination from leaks or accidents or potential terrorist actions, nuclear waste should only be moved once, and only when a deep underground permanent repository is in place that could safely isolate the dangerous waste for the million years that it will remain hazardous.”

Tom “Smitty” Smith, director of the Public Citizen Texas office, said: “Texans do not consent to the risky plan to store high-level radioactive waste at private sites on an open pad above ground in Texas. Another company near Hobbs New Mexico – less than 50 miles away — is expected to file an application to open a storage site that would accept the rest of the nation’s high level nuclear waste. These twin ‘storage sites’ likely would create a de facto high level national waste sacrifice zone. This proposal invites disaster because the private owners will be cutting costs at every turn to maximize profits. If there was radioactive contamination our land, air, water, and human health could be harmed for millennia.”

Beyond Nuclear is a national nonprofit organization that aims to educate and activate the public about the connections between nuclear power and nuclear weapons and the need to abandon both to safeguard our future. Beyond Nuclear advocates for an energy future that is sustainable, benign and democratic.

Public Citizen, Inc., is a national, nonprofit consumer advocacy organization with over 400,000 members and supporters nationwide.  Public Citizen’s mission is to protect openness and democratic accountability in government and the health, safety and financial interests of consumers.  Public Citizen advocates for policies that will lead to safe, affordable and environmentally sustainable energy.

SEED Coalition is an environmental nonprofit organization with 2,000 members that works in Texas and other states to protect human health and the environment, including land, air, water and wildlife. The organization focuses on clean energy advocacy as a means to reduce pollution. SEED Coalition opposes the storage of radioactive waste from around the U.S. in Texas or New Mexico due to health and safety and environmental concerns. SEED Coalition’s members include neighbors of the proposed WCS facility and associated transportation routes.