Back in March of this year, the state of Texas sued several federal agencies in the Fifth Circuit over the federal government’s failure to complete the licensing process for a nuclear waste storage repository at Yucca Mountain, Nevada, saying it violated the Nuclear Waste Policy Act.  They did this in order to facilitate the licensing of a Texas high-level radioactive interim waste storage facility in Andrews, TX at the Waste Control Specialist (WCS) site. 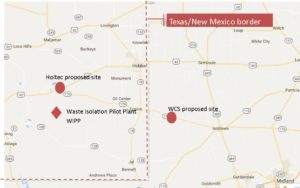 Recently WCS withdrew it’s license application, however Holtec International, a nuclear fuel manufacturing and management company based in Florida, filed an application with the Nuclear Regulatory Commission to create a temporary storage facility that would consolidate spent fuel rods from across the U.S. at a single site about 15 miles north of the Waste Isolation Pilot Plant in New Mexico, just over the border from the WCS site in Texas.

The lawsuit, brought by Texas seeks to force an up-or-down vote from the Nuclear Regulatory Commission on the licensing of the repository at Yucca Mountain stating that a 2012 court-ordered deadline for a final licensing decision has been “wholly ignored” by the federal government. The defendants include the U.S. Department of Energy, the NRC, the NRC Atomic Safety and Licensing Board and the U.S. Department of the Treasury.

Nevada, which was allowed to intervene in May, told the court in its filing on July 31st that Texas was trying to get the judicial branch to “solve the nation’s decades-old nuclear waste quagmire” by usurping the authority of two executive branch agencies — the DOE and the NRC — and Congress.