A new investigation shows a strong correlation between the fracking boom and a significant increase in fatal crashes in Texas.

Hydraulic fracturing, or fracking, is known for the environmental dangers it poses: obscene water use, groundwater contamination and the release of greenhouse gasses. An equally dark side to the practice has recently been revealing itself. 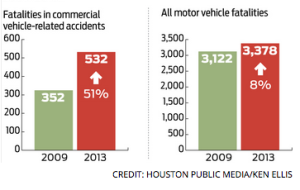 Working together, The Houston Chronicle and Houston Public Media conducted an investigation that found fatalities involving commercial vehicles on Texas roads have increased dramatically since the fracking boom of 2008. In 2009 there were a reported 352 highway fatalities involving commercial vehicles. That number jumped to 532 in 2014; a 51 percent increase.

For decades, Texas’ incidents of auto fatalities were in decline. Improved safety standards, such as seat belts, child seats and airbags made being on the road less deadly. However, Texas saw an 8 percent increase between 2009 and 2013, the same time the fracking boom started.

Texas is not the only state to see an increase of fatal crashes related to fracking. According to a data analysis released by the Associated Press, fatalities have quadrupled since 2004 in other heavily drilled areas.

On average 400 tanker trucks, which make between 2300 and 4000 trips per well, are used to carry water and supplies to and from every fracking site. Many of these trucks travel on rural roads that aren’t designed for such heavy traffic.

One lawsuit against Company Well Services showed that seven natural gas workers were sent to their hotel after each having worked a 24-hour shift. These workers were not provided a designated driver or an on-site resting area.

According to police reports, the driver, Daniel Zambrano, dozed off and collided with the back of a stopped school bus at 70 mph. Luckily, because the children had been warned of the dangers of sitting in the back of the bus on Texas 72 none of them were harmed. Zambrano and two others in the van were not so lucky and died at the scene.

These accidents are not only due to the increased number of commercial vehicles on the road but also a result of negligence. Many times these companies employ unqualified drivers, operating vehicles unsuitable for the road. Lenient regulations have allowed these tycoons to engage in unsafe practices nearly unchecked.

Public records show, the Department of Public Safety has made an attempt to respond to these accidents. State troopers have increased truck inspections and have doubled the number of audits performed. Tom Vinger, DPS spokesman, refused to speak to the Houston Chronicle and Houston Public Media about the rise of commercial accidents in Texas.

Unless tighter regulations are put in place and a way to hold these companies accountable for their disregard is established, the amount of fatalities on Texas roads will continue to grow with the number of Hydraulic Fracturing operations.