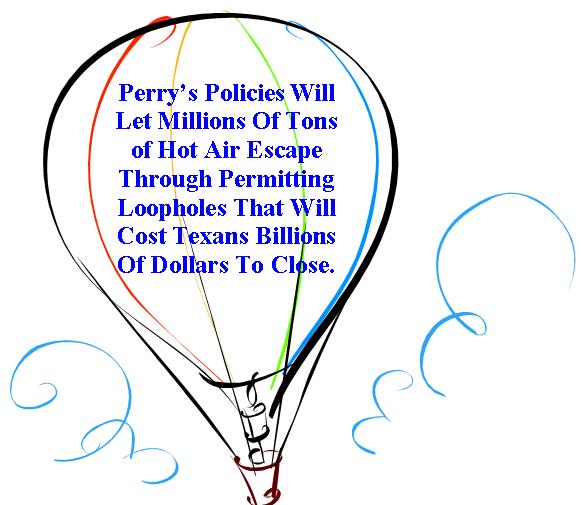 Public Citizen Calls For A Moratorium On Permitting All New Sources

Of Greenhouse Gases Until Texas Gets Plan In Place

EPA issued proposed rules today that will require Texas to modify its state implementation plan to cover Greenhouse Gas Emissions (GHG).  If Texas does not, then EPA is proposing a federal implementation plan (FIP) that would apply in any state that is unable or unwilling to submit a plan to permit greenhouse gasses.

We are calling on Texas to put a moratorium on permitting of any new sources of greenhouse gas emissions until Texas gets its permitting plan in place and approved.  Governor Perry’s policies and the decisions of his appointees to not regulate global warming gasses will let millions of tons of hot air escape through permitting loopholes that will cost Texans billions of dollars to close. 55 million new tons of CO2 emissions will have been added to Texas overheated skies by the 8 additional coal plants permitted by Perry’s appointees. Three more plants that could emit nearly 22 million tons a year are in the permitting stage, and a moratorium could stop adding hot air and higher costs to the consumer.

The first rule of holes is to quit digging. Rick Perry needs to drop that shovel. It’s time for the Governor to stop complaining and picking fights, and get down to the actual work of governing. It’s easy to blame others when Rome is burning: it’s another thing entirely to be throwing gasoline on the fires.

Texas leads the nation in emissions of greenhouse gasses, and could be leading the nation in economic development from efforts to reduce these emissions. Reducing our greenhouse gas emissions through efficiency programs and leading the country in the development of wind energy has provided jobs for 84,000 Texans, and cheaper, cleaner electric bills for folks when we need it most. Public Citizen calls on both candidates for Governor to quit ducking this issue and disclose their plans for reducing global warming gasses.

Perry and his appointees have known this day is coming for nearly 20 years.  The Texas legislature gave TCEQ the authority to regulate greenhouse gasses in 1991. Since then 37 other states have made plans to reduce global warming emissions, but not Texas. Since 1990, global warming emissions in Texas will have increased by 25 percent.

Perry and his appointees have blocked any attempts to even get early credit for the approximately 42 million tons of emissions reductions resulting from the renewable energy we’ve put on line, or the energy efficiency we’ve installed. This short-sightedness will cost Texans billions to make additional reductions. These are costs that could have been avoided if Perry’s appointees had acted when EPA called for early submittal of pre-existing emission reductions.

This rule would apply to new major stationary sources and major modifications at existing major stationary sources. Those sources must obtain a PSD permit outlining how they will control emissions. The new permits will require facilities to apply best available control technology, which is determined on a case by-case basis taking into account, among other factors, the cost and effectiveness of the control.

EPA intends to finalize this rulemaking action on December 1, 2010, and give states a deadline of 12 months thereafter to submit their plan.

In an earlier dispute with EPA over other issues with Texas’ permitting rules, a lobbying push by oil giants resulted in a bipartisan group of Texas legislators asking state environmental regulators to quickly solve a permit dispute with the U.S. Environmental Protection Agency that has left some of the nation’s largest oil refineries in operating limbo.  This letter, signed by 46 legislators, is the latest indication that while Gov. Rick Perry and his Republican supporters are ready and willing to wage war with Washington on everything from environmental regulation to education spending, some battles are wearing on the industries that have helped Texas weather the recession.

Let’s move Texas forward along with the rest of the nation in making sure our regulation of pollution ultimately benefits all Texans and harms none.