The heat has been turning up on the State Department and President Obama this past week from KXL Dissent. Nearly 400 youth were arrested while protesting against the Keystone XL tar sands pipeline in front of the White House this past weekend, which was the largest youth act of non-violent civil disobedience at the White House in more than a generation. On Monday, nine people were arrested at the State Department building in San Francisco during a youth led protest of the Keystone XL pipeline. The momentum to stop this climate-killing pipeline has been building all across the country, and yesterday people in Austin made their stand against toxic tar sands.

People gathered at the south gates of the Texas Capitol and marched to Austin Club to have a welcoming demonstration for Canadian Ambassador Gary Doer, who was in town to give a speech promoting the Keystone XL pipeline, among other things.  Public Citizen, Sierra Club, Austin Climate Action Network, and Environment Texas organized the event, but opposition to the pipeline extends well beyond environmental groups and includes many conservative landowners.

Banners hung from the parking garage next door to the Austin Club greeted the protesters.  People carried signs and marched to the sounds of djembe, pots and pans, cornet and chanting.

Attendees for Ambassador Doer’s luncheon had to walk through the crowd of about 30 chanting protesters who formed a picket line in front of the entrance. 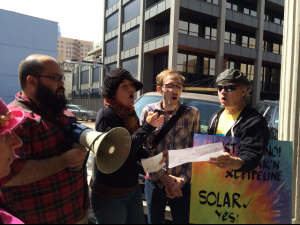 Yesterday marked the end of the public comment period with the State Department for the Keystone XL pipeline. This was the last chance for citizens to officially weigh in on the issue. President Obama still has 60 more days to hear from the different government departments as to whether they think the pipeline will be in our national interest. President Obama is expected to make a final decision on whether or not to approve the pipeline by the middle of summer.