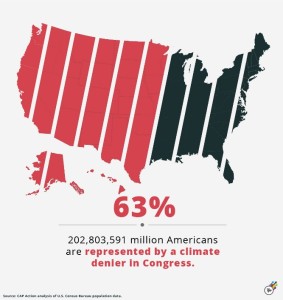 2014 and 2015 were back-to-back years that both earned the title for hottest year on record. and February 2016 was the warmest month, globally, ever recorded. And yet U.S. lawmakers continue to deny the facts.  Earlier this month, the Center for American Progress Action Fund (CAPAF) released an analysis of climate change denial in U.S. Congress called “The 2016 Anti-Science Climate Denier Caucus.” Their research found that more than 63% of Americans are represented by someone in Congress who denies that climate change exists. 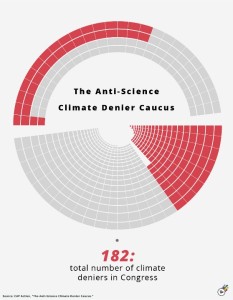 A recent poll revealed that 76% of Americans believe global climate change is occurring, including 59% of Republicans. According to a poll by NBC News and the Wall Street Journal, 67% of Americans support President Obama’s Clean Power Plan. The results of these polls don’t correlate with the fact that that the number of Congressional climate deniers has increased from previous years. From severe weather, wildfires, drought, and flooding, climate change is impacting Americans every day, and it’s evident that human activity is the dominant cause. Despite this evidence, 70% of the Senate GOP still denies climate change. 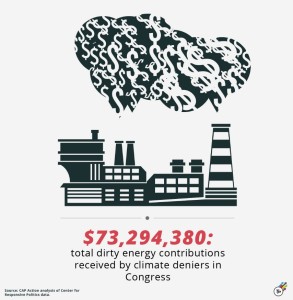 In the analysis, CAPAF also looked into dirty energy money’s influence over Congress members. They found that climate deniers in Congress received more than $73 million in contributions from coal, oil, and gas companies. This is an increase of nearly $10 million from last year. When asked about their views on climate change, many deniers dodge the question by saying “they aren’t scientists”.

According to Sondre Båtstrand, a Norwegian researcher, the U.S. Republican Party is the only conservative party in the world which denies the reality of climate change. Båtstrand believes the GOP’s denial is due to three factors: the fossil fuel industry’s political spending, a commitment to free-market ideology, and the intense political polarization that punishes moderate-minded party members.

In February 2016, over 200 lawmakers in U.S. Congress signed onto a court brief opposing the president’s Clean Power Plan. At the end of 2015, the House of Representatives passed two resolutions to kill the Clean Power Plan. The Plan would regulate power plants’ carbon emissions and 67% of Americans support it. So it’s clear that Congress isn’t working the way it’s intended to. Members of the House and Senate are elected to represent the interests of American citizens, not their own fat wallets and the interests of dirty energy companies.

Regarding the state of Texas specifically, the 2016 Anti-Science Climate Denier Caucus found that 17 out of 38 Texas Congressional members are climate change deniers. In 2016, this is not only unacceptable, but is dangerous for Texas families who depend on their elected leaders to protect their futures. When the impacts of climate change become more and more apparent each year – more severe storms, deadly wildfires, crippling drought, and rising sea level – it’s clear there’s no time to waste. Climate change deniers in Congress, like Ted Cruz, stand in the way of these common sense safeguards. Texans and Americans across the country deserve leaders who will stand up to face this threat head on – not those following the playbook of their largest campaign donors.