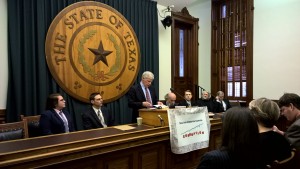 On Monday March 9th, the Texas Anti-Corruption Campaign held a press conference calling for the end of corruption culture in Texas politics. The Texas Anti-Corruption Campaign is a new growing alliance between a wide group of nonprofit and political organizations, including: Public Citizen, Audits in the Public Interest, Clean Elections Texas, Common Cause Texas, Libertarian Party of Texas, Texans for Public Justice, and TexPIRG.

The citizen’s movement began as a response to the patronage and cronyism that became synonymous with former Governor Rick Perry’s Administration and has grown as more and more Texas agencies are being investigated for inefficiencies. As Tom “Smitty” Smith, director of our Texas office here at Public Citizen said:

We believe that the people are ultimately responsible to hold the government accountable in the face of rampant corruption and abuse of power. We are paying a corruption tax-billions of our tax dollars are being wasted through cronyism and corruption. We need to stop efforts to defund and handcuff our state funded watchdogs at the Public Integrity Unit and the Ethics Commission. It’s time to take the muzzle off and give them new teeth.

Ethical issues in government were highlighted in the State of the State in which Governor Abbott declared that ethics would be one of the five emergency items he assigned during the 84th Legislature. He said:

“The faith and trust that Texas citizens place in their elected officials requires each of us to conduct the business of the state in the most transparent and honest manner possible. Strengthening our ethics laws relating to disclosure of state contracts with elected officials, prohibiting lawmakers from voting on legislation from which they could profit and increasing disclosure of campaign finance information will ensure a more responsible government for Texas.”

The Texas Anti-Corruption Campaign applauded Governor Abbott’s call for change and hoped to use the momentum to promote good government reform in the legislature. To help solve this issue, the coalition developed a 10-point plan to make progress toward their goal of ending corruption in government.

Within the 10-point plan for improving Texas ethics rules, there are three main goals of the Texas Anti-Corruption Campaign. The first goal being to break the ties between political donors, lobbyists and government decision makers, and to break the ties between private donations to campaigns and conflict of interest standards for legislators and public officials. This first goal essentially calls for an end of “pay to play” politics by closing the revolving door between officials and lobbyists. This type of corruption is what has caught the attention of state and national news during the Perry administration. JC Dufresne, vice chair of Common Cause Texas, elaborated on how pay to play politics undermines the average citizen’s voice by stating:

The current system in Texas encourages public officials to be more responsive to out-of-state millionaires than to everyday Texans. There’s been no better time to unleash the watchdogs.

The second point that the group discussed was promoting full transparency in government and elections. This would include updating personal financial statements and online information that would be open to the public, as well as calling for a consistent system for contract procurements and uniform open records requirements. The coalition believes that increasing transparency would help improve accountability and oversight in government. Sara Smith, program director at TexPIRG, explained:

Our confidence in our government is near an all-time low – and this is particularly true with young people.

Many believe that a lack of political efficacy and apathy are a result of constant scandal and inefficiencies in government. By creating a means for a more transparent government, it is hoped that the public can feel confident in holding their elected officials and state agencies accountable for their actions.

Finally, the coalition stressed the importance of keeping elected officials accountable. The lack of enforcement divisions and procedures in many agencies has become a source of ineffective management in the state of Texas. Hildebrand, chair of the Libertarian party of Texas, went on to say:

It’s obvious that our government at all levels has been too long without a proper check and balance from its citizens. This corruption must be brought to an end in order for the people of Texas to remain prosperous and free.

By creating an enforcement division and maintaining agencies such as the Public Integrity Unit, the Texas Anti-Corruption Campaign believes that this would help increase oversight and accountability in government.

Some bills that the Texas Anti-Corruption Campaign supports this legislative session are:

For more in depth information on ethics in Texas visit the Texans for Public Justice website.

How Will ExxonMobil Adapt to Climate Change Crisis it Helped Create?

Above All Else World Premiere at SXSW