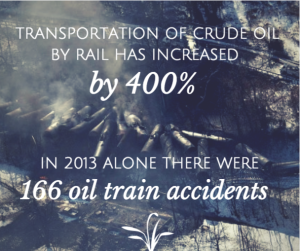 If the fatal, Lac-Megantic oil train derailment in Quebec in 2013 did not raise concern for Americans, especially those in towns with railroad lines, the derailment in West Virginia certainly has. Carrying about 3.2 million gallons of crude oil, the CSX train that went off the tracks sent fireballs 300 feet into the air and spilled crudes into the river.

Like many trains nowadays, the CSX train was carrying Bakken oil, a particularly flammable type of crude. Yet the high-risk nature of Bakken oil has not stopped its transportation across the United States.

“With crude oil and gas traveling through towns in our state with ever-increasing frequency, safety must be paramount. Accidents involving toxic chemicals can have serious health and safety implications,” U.S. Sen. Cory Booker told NJ news. Booker is a member of the Senate Committee on Commerce, Science, and Transportation. “We were fortunate that there were no fatalities in either of these accidents, but next time we might not be so lucky.”

Public concern also stems from the growing number collisions. In 2013 alone, the U.S. Pipeline and Hazardous Materials Safety Administration, or PHMSA, reported 166 oil train accidents. In response to the rise of oil train accidents, manufacturers have increased the production of crude oil to mitigate the oil loss. The National Transportation Safety Board stated that the transportation of crude oil by rail has increased by 400% within the past decade.

The combination of the increase in oil train accidents and crude oil production results in an overall escalation of pollution, water contamination, and safety hazards. Crude oil trains are especially dangerous because shipments come in 100 or more cars, increasing the possibility of accidents. The CSX train in Virginia itself had 109 cars, and the company is still unsure about the extent of the oil spill and the number of cars derailed.

Due to recent events, the U.S. Department of Transportation (DOT) has received pressure to expedite new safety rules. In response, the DOT proposes new initiatives for a new standard for cars, safer protocols, and new operational standards.

A projection from a previously unreported analysis by the Department of Transportation (USDOT) that reviewed the risks of moving vast quantities of both fuels across the nation and through major cities predicts that trains hauling crude oil or ethanol will derail an average of 10 times a year over the next two decades, causing more than $4 billion in damage and possibly killing hundreds of people if an accident happens in a densely populated part of the U.S.  Specifically the USDOT analysis projects:

The derailments have evidently stood as a warning sign for the United States to enhance the safety of transporting hazardous crude oil by rail. However, the newly proposed regulations may take months to be implemented, so it is important for the public to not lose its momentum for the campaign for safer crude oil shipment transportation.