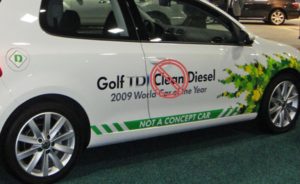 Volkswagen has pleaded guilty to three felony counts for engineering its cars to evade clean air tests. This fraud was a massive deception against consumers and regulators, led to 40 times the pollution levels permitted for nitrogen oxide and, according to researchers, caused roughly 60 deaths.

The justice department determined that this level of fraud required tough criminal penalties beyond the many civil cases that have been settled or are still in play. Government prosecutors were right to force Volkswagen to plead guilty to multiple felonies – and not to accept a deferred prosecution deal in place of guilty pleas – but they should have imposed the fines closer to those called for by the sentencing guidelines, which would have been five to almost 10 times higher.  The harshest penalties would be exacted against an individual who went on a shooting spree and killed dozens of people. Here, the culprit was a corporation, and we don’t know the names of the people Volkswagen killed. But they died just the same, and the company should be held accountable.

The civil justice system previously forced Volkswagen to make amends to consumers. This fraud was a massive deception against consumers and regulators.  In June of last year, Volkswagen agreed to spend up to $14.7 billion to settle allegations of cheating emissions tests and deceiving customers on 2.0 liter diesel vehicles. As part of the settlements, VW agreed to pay Texas $50 million in civil penalties and attorneys’ fees for its violations of the Texas Deceptive Trade Practices Act, which bans false advertising and sale of misrepresented products. About 32,000 diesel cars capable of emissions cheating have been sold in Texas, according to U.S. Environmental Protection Agency figures. That’s compared to about 480,000 nationwide and 11 million globally.

The settlement also includes $2.7 billion for environmental mitigation and and another $2 billion to promote zero-emissions vehicles. About $192 million of the mitigation fund will go to projects in Texas, according to a news release from the state’s attorney general’s office.