One type of wind that is being developed extensively and contributing to Texas’ renewable generation assets is coastal wind.

In 2009, several new wind projects have been brought online and are continuing to be developed. This was after an extensive, multi-year long study to minimize the risk of environmental impact in the area. Numerous concerns had been raised about migratory bird issues, wetland protection, and interference with any possible endangered species that might be in the area. Good engineering and construction practices by the developers and innovative use of new technologies help bring these generators safely online.

At Babcock & Brown’s wind farm on King Ranch, which we toured this spring, access roads twist and turn like a crazed snake trail through the brush to avoid any interruption of the natural water flow. The wind tower bases were also completely buried to allow normal water flow and a radar system developed for the military to track birds was put in place.

DeTect, Inc is the company that makes the “avian avoidance systems.”  They installed the radar and collected data for over three years to profile the migratory bird habits and further developed the software for this application. The project developers then hooked the radar tracker into the wind farm control system and allows it to shut down the turbines if approaching migrating bird flocks are at risk.

So now we have a new clean, well engineered source of energy in the south part of Texas.

This is important for several reasons.  The transmission problems that have occurred in the north Texas wind areas which require the build out of large amounts of transmission lines (CREZ) is avoided, but more important is the time of day that the wind blows on the coast. In Texas there is a large increase in the consumption of electricity that starts around noon and peaks between 5 and 6 pm. North Texas wind blows mostly at night, but the coastal wind starts going strong around 2 and peaks right at the same time that the demand is the highest. (See geeky chart supplied by Babcock and Brown). 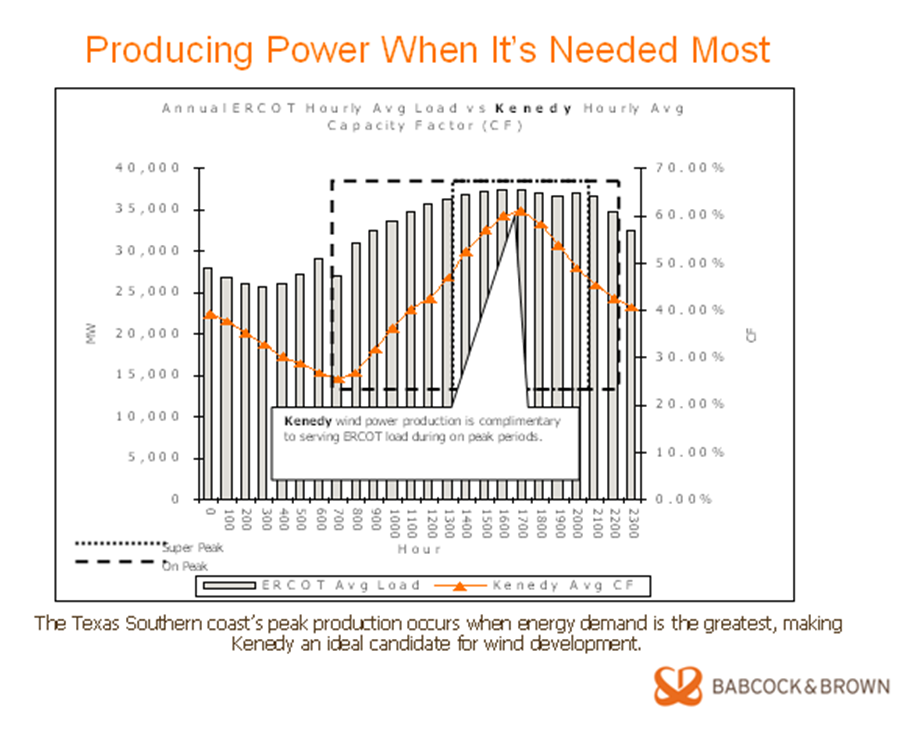 There is still opposition to situating wind farms in the coastal areas and offshore in Texas but it’s an energy resource that matches our use and is too valuable to waste. With good planning and proper site controls and installation, this will be a major factor in Texas’ clean energy future.