Senator Troy Fraser, the chair of Senate Natural Resources Committee, warned the major electric generation companies this afternoon that unless they move swiftly to shore up their power plants against extreme weather, they can expect more regulations from state government.

Fraser said he would prefer free market solutions, but is prepared to impose new regulations, letting everyone in the room know that they were going to be leaning on the Electric Reliability Council of Texas (ERCOT), the Public Utility Commission (PUC) and the Railroad Commission, but clearly directing his remarks at the top executives of Luminant, NRG Texas and Direct Energy, who were there to testify as a panel during the hearing.

The following is Public Citizen’s testimony at today’s Senate (Business and Commerce and Natural Resources) hearing on the rolling blackouts. Public Citizen’s was the only public testimony given today, following the sea of invited testimony from agencies, retail electric providers, and electric generation companies.  If you want to watch the archived video of the hearing, click here.

How Much Money was made during the Blackouts?

Could The Blackouts have been Caused by Market Manipulation?

What Can Be Done to Prevent Future Blackouts?

On a cold and icy winter night in February 2003, one TXU energy trader said to another, “its 18 degrees outside  . . . get out the hockey sticks . . . there is an inch of ice and three inches of crystal right on top of it . . .”[i] Then suddenly there wasn’t enough power being sold on the “spot market” because of a conscious decision to withhold energy from the market which resulted in the price per MWh on the spot market shooting up like the tip of a hockey stick . . . and millions were made.

This style of money making by withholding energy in the spot market was right out of the Enron playbook.  TXU (now Luminant) made a lot of money that night.  They were subsequently fined by the PUC for market manipulation – but the fine paid was a fraction of the profits they made.  The PUC adopted a series of reforms, but they have only limited the impacts.   According to the press, Luminant lost $30 million during the February 2nd event, but others may have profited.

How much money was made during this last blackout?  Perhaps as much as $385 million due to the higher than normal prices.  It will be several months before the market settles out and we know fully.  However, we can get a good estimate by looking that the balancing energy market, which is the spot marketplace where those who don’t have enough energy go to buy from those who have an excess.  Another good indicator is the day ahead markets.

The balancing energy market usually translates to about 5% of the market, but with 8,000 MW of plants being offline, we suddenly had a lot of traders looking on the market for energy at any price, and the cost of energy quickly hit the cap price of $3,000 per MWh.  With a 5% balancing energy or spot market the cost to the market was $49.6 million on February 2nd.

When you contrast that with the previous day, when the highest price per MWh was $394 giving us a total cost on the spot market of just $2.3 million, and then again when the system had stabilized on the 4th of February with a total cost on the spot market of about $2.8 million, that’s quite a difference from the day when many Texans were sitting for extended periods of time in the dark and the cold.  So, if the spot market was just 5% – the overcharges would come to about $46 million more than was paid the day before.

But this may be understating the costs.  If 8,000 MW were offline then the spot market was more like 15% of the total market, and at $3,000 per MWh that inflates the spot market costs to $149 million. With the additional costs presented at the ERCOT board meeting (see the slides from the report delivered on Feb 14 ) the day ahead market was rising before and after the event.  There was $176 million[ii] in the day ahead market on February 3rd and 4th, 10 times the normal price, for the following day (Feb 3rd) and the ancillary services market charges are reported to be $60 million[iii] as the market  bounced in response to the high prices.  We suspect this is where the money was really made.  The total additional cost of this single event could be as much as $385 million, when all the market charges are finally added up.

And there were other costs, too.  People lost work because they couldn’t get around because traffic lights were out, productivity was down for many businesses because power was off at their place of business or at other locations upon whom they were dependent, and at least one person died[iv] as a result of this incident

Before deregulation, when bad weather was coming, regulated utilities were expected to start up plants in advance, and were fined if there were market shortages.  In today’s deregulated market we reward market shortfalls and allow participants to make millions, leaving us with an electricity market that has failed Texas at both ends.  If our power supply is dependent on the whims of that market then February 2, 2011 probably won’t be the last time it leaves us in the dark.

So how do we prevent blackouts in the future?  We can use the Energy Plan that Senator Fraser is working on as an opportunity to transform and modernize the way we generate energy in Texas. We need to look at the dynamic between all three legs of the stool: Consumers, electric providers and gas companies.

Below is a summary of 4 days of data from ERCOT’s website around the time of the event along with a graphic representation of the average market prices the day of the rolling blackouts. 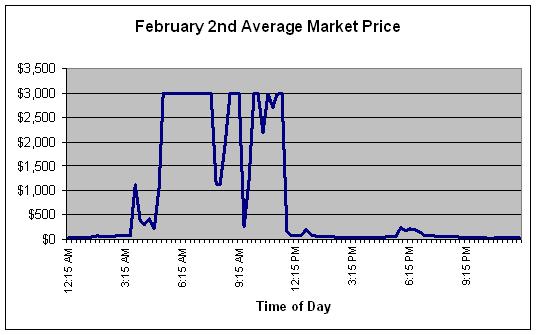 The following slides are from a Review of February 2, 2011 Energy Emergency Alert (EEA) Event presented at an Special ERCOT Board of Directors meeting on February 14, 2011. 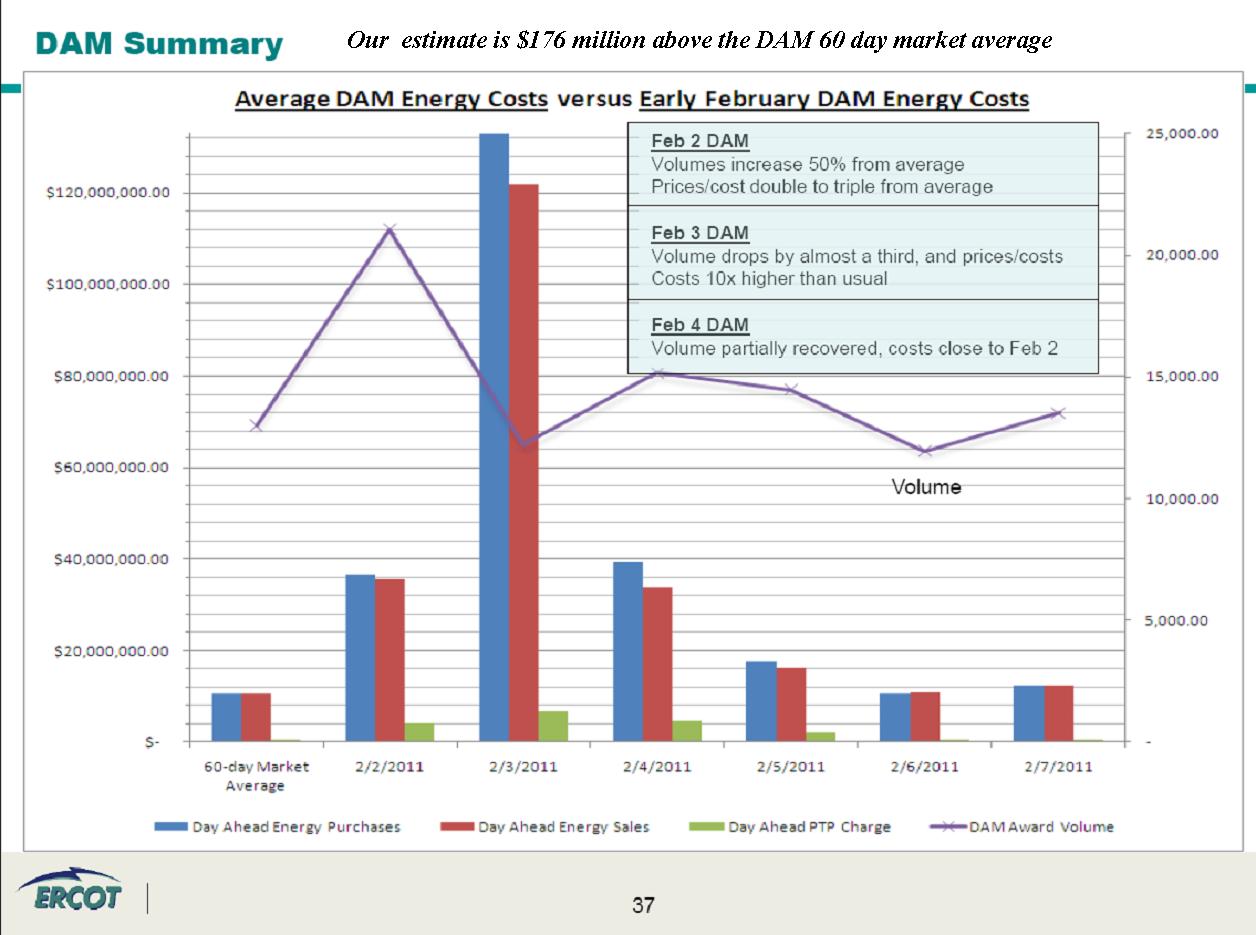 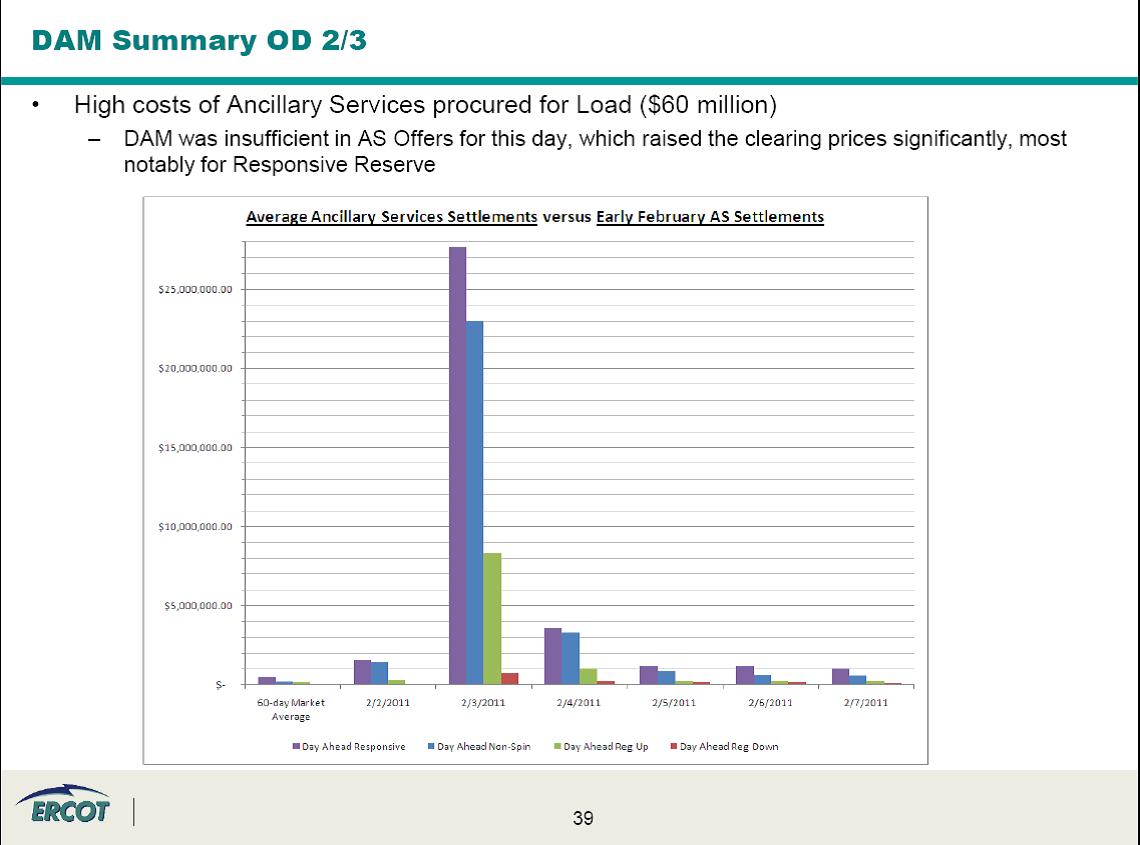 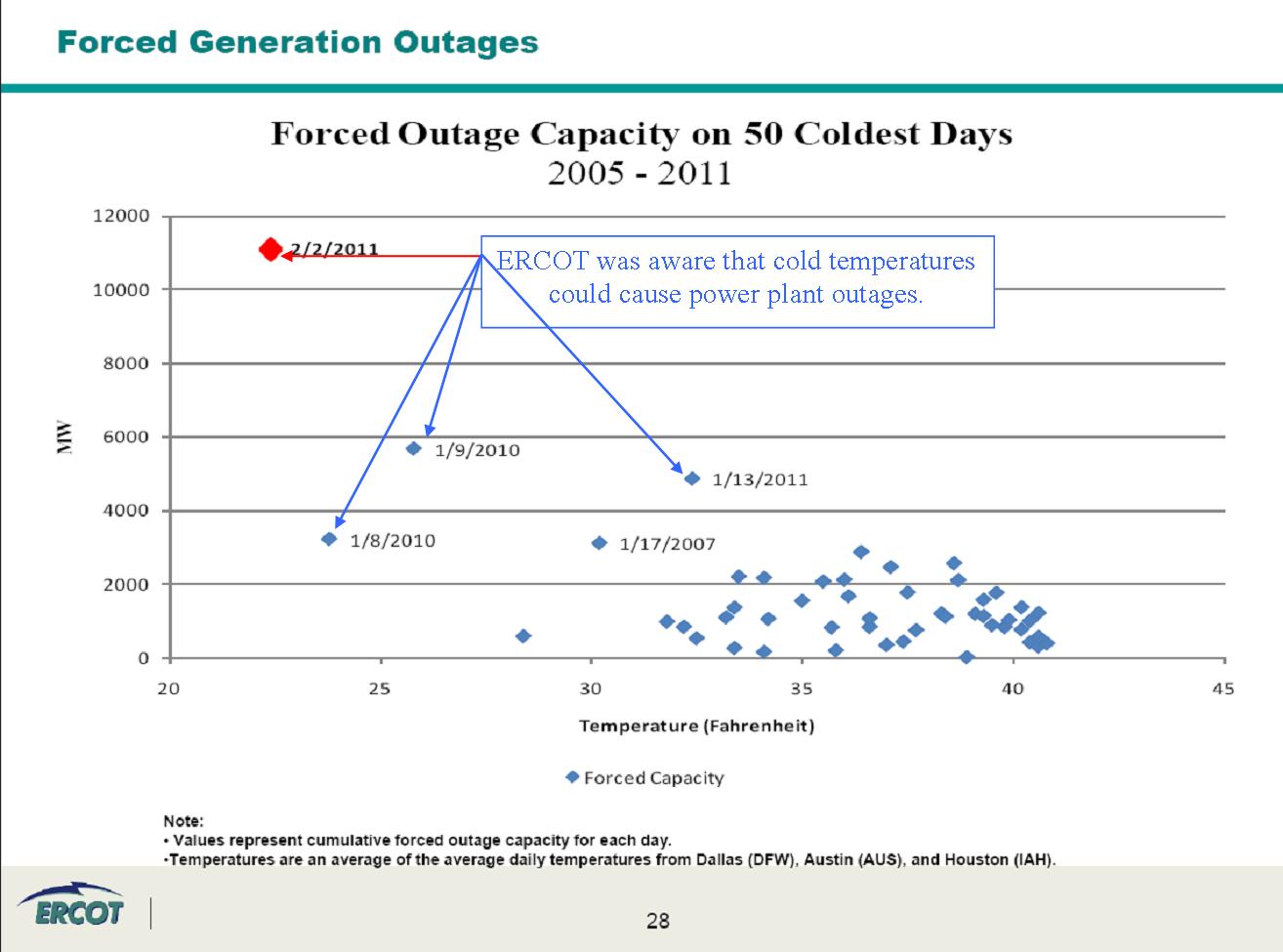 Shavon Caldwell and her four children woke up to a very chilly and dark home. She had no way to give her son his asthma treatments. But it was an even more serious situation for her 29-year-old brother Stephen, who lived a few neighborhoods away.

“He woke up out of his sleep not being able to breathe,” she said.

Caldwell‘s sister received a frantic call from him early Wednesday morning. He, too, did not have power, therefore cutting off the oxygen he sleeps with every night.

“He weighs, like I said, over 500 pounds, so I knew that he wouldn’t be able to breathe without the machine,” Caldwell said. “By the time they got there, he had passed away.”