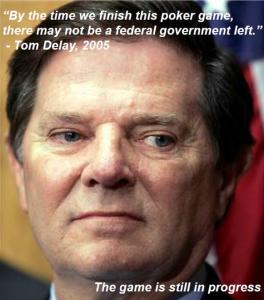 When an elected Republican Texas Court of Criminal Appeals ruled earlier this month that Tom Delay’s flooding of corporate contributions into state elections for the purposes of manipulating Congressional redistricting was “wheeling and dealing (that) was a tad shady, but legal,” it brought to an end an almost decade-long criminal case, but it didn’t end the controversy surrounding the Former Majority Leader.

Prosecutors claimed the ruling undermines the fairness and integrity of Texas elections, while Delay said the verdict gives him fresh impetus to run for elected office again. An October 28th national online screening of the only documentary made about the Delay case will allow viewers to look at the original evidence and make up their own minds.

Filmmakers Mark Birnbaum and Jim Schermbeck are using the court decision to team-up with online screening room 2ndLine.tv to host an October 28th live internet screening of the “The Big Buy,” their 2006 investigation of the scandal that forced Delay to resign from Congress.  Viewers will be able to vote via a Google Docs link on whether they think Delay knowingly broke Texas law when his Political Action Committee solicited corporate donations for Republicans running in state House races.

Saying the issues examined in the 2006 film are still very much in play in national politics in 2014, Birnbaum noted that over the years, the criminal intent of Delay had taken a back seat to the widespread adoption of his strategy to take control of Congress.

“Tom Delay’s use of corporate money to buy elections and build what Karl Rove termed “a permanent Republican majority” was the blueprint for many of our current political controversies. If you want to know how we got where we are, Delay provided the map.”

In September, the Republican National Governors Association accidentally released a list of previously secret corporate donors that gave so-called “dark money” to “bring their particular expertise to the political process while helping to support the Republican agenda.” In August, a state judge ruled that the Florida Legislature violated the state’s constitutional ban on favoring a political party because congressional boundaries of two central Florida districts were redrawn to benefit the Republican Party.

Delay’s 2003 strategy in Texas was a milk run for Republican strategists in Florida and across the country who took advantage of the 2010 census to permanently redistrict Congress, first by winning state legislatures and then redrawing their House districts to tilt the playing field in their favor. Their success was unprecedented. In 2012, Republicans maintained a 33-seat majority in the House, even though GOP candidates as a group got 1.4 million fewer votes than their Democratic opponents. It was only the second time since World War II that the party receiving the most votes failed to win a majority of House seats.

It features extensive exclusive interviews with Earle as his office builds its case against Delay that resulted in convictions for money laundering and conspiracy to commit money laundering – the convictions that were tossed by the Appeals Court on October 1st. It also includes interviews with lawyers for Delay’s co-defendants, who plead guilty, and long-time observers of Texas politics, including Paul Burka, Lou Dubose, Jim Hightower, and the last appearance on camera of national columnist Molly Ivins before her death from cancer in 2007.

Known as “The Hammer” for his ruthless enforcement of party discipline and reputation for retribution as Republican Minority Whip and then Majority Leader, Delay plotted to take over the Texas Legislature using tidal waves of corporate contributions and then have that body redraw congressional district lines to gain a significant number of new Republican seats in the House of Representatives. It worked. Five new Republicans were elected from the Lone Star state and provided the margin of victory for more than one close vote on national legislation in the subsequent 2005 session.

Taking its name from the New Orleans brass band tradition of interaction of performers and audience, 2ndLine.tv is a new internet-based platform for the live screening of concerts, films, and performances allowing a direct connection between artists and viewers. Participants in this screening can pay whatever they can based on a suggested a five-dollar ticket price with all proceeds going to Texans for Public Justice.

TPJ is the Austin-based ethics watchdog group that filed the original complaint against Delay and was also responsible for filing the original complaint against Texas governor Rick Perry that led to his recent indictment on charges of abuse of power after threatening the funding of Ronnie Earle’s successor, Travis County District Attorney Rosemary Lehmberg, who also appears in The Big Buy. It’s a small world in Texas politics.

Likewise, many DC figures featured in The Big Buy are still on the scene. Speaker of the House of Representatives John Boehner ascended to Majority Leader, and then to his current position, as a result of Tom Delay resigning. Former Representative Chris Chocola received tens of thousands of dollars from Delay’s political action committee and is now president of the Club for Growth, itself a huge spender of dark money in congressional elections.

Scheduled for 8 pm Central Standard Time on Tuesday, October 28th, The Big Buy already has its video trailer up and running online. Audience members can “tune in” on the 28th and interact with the filmmakers as the film is being shown, in a Q&A afterwards, as well as vote on Delay’s guilt or innocence in breaking the state prohibition against corporate campaign donations.

“We’re excited that 2ndLine as provided a second life for a film that we think is still the best case study in how the current atmosphere of political polarization got institutionalized,” said Schermbeck, who now lives in Lubbock and is working with Birnbaum on a reality series that intertwines stories of grassroots activists who transcend traditional left-right demarcations. “We hope folks take advantage of this great opportunity to better understand how current front-page scandals can trace their origins back to Texas and Tom Delay.”