A new technology – solar roadways – has emerged that has the potential for powering the entire United States 3 times over for each year it is in service, along with reducing 75% of greenhouse gases the US produces. With over 31,000 sq miles of roads, parking lots, sidewalks, and bike paths connecting the US, converting the surface areas into solar roadways is the ambitious and creative solution that creators Julie and Scott Brunsaw have proposed to solve the energy problems we face today and ahead of us.

Scott Brunsaw is an electrical engineer based in Idaho with his wife and solar roadway partner, Julie. Scott thought of this idea when he was younger and dreamed of a world that was futuristic and sustainable. First hand experience working in an oil company grew his drive to build a practical solar road.  Now, he and his wife have made the technology a reality.

The solar roadway panel itself is in a hexagonal shape that is designed to last a minimum of 20 years. It is covered in a snow and ice resistant, durable glass that is capable of supporting 250,000 lbs of weight and is equipped with programmable LED lights to easily light up the road. A parking lot-size prototype has been built with funding from the Federal Highway Administration and through a public funding initiative that has raised close to $150,000,000 through Indigogo.com.

Inside each of the solar panels are hi-tech microprocessing chips covered in a tempered glass that is capable of heating the panels to a few degrees above freezing to keep snow and ice off of the roads, making them safer and eliminating the need for snow plows. The microprocessing chips can also detect weight and can be programmed to illuminate the LED lights in the panels to show road lines, animals crossing, hazards on the road and more. The panels themselves are made up of mostly recycled material and are attached to a cable corridor that lines up alongside the road which is where the power lines and fiber optics are stored. More about the specs and benefits of solar roadways can be found watching this entertaining video. 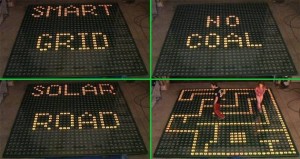 Why this is so important to the US and the world can be seen in multiple statistics of our current energy situation. In 2011, the United States’ energy sources for electricity were made up of 91% non renewable resources such as coal, petroleum, natural gas, and nuclear, with only 9% made up of renewable resources. With energy production contributing to 79% of greenhouse gas emissions, the US is in dire need of a new energy source to not only lower its contribution to global pollution, but also to act as an example to developing countries who are building their infrastructure. If an idea like solar roads were to be adopted by the most powerful country in the world, it would have a tremendously positive effect on the globe including cutting a significant amount of transportation emissions, creating new jobs to build the new infrastructure, help reduce dependence on foreign oil, and provide access to a  large renewable energy resource.

The positive potential for this project is very high, but it comes with great costs including an investment of up to $56 trillion to cover 29,000 sq miles of US roadways, electrical grid updates that allow for a greater electricity capacity, along with much more research and testing that needs to be done. Although the upfront costs are significant, solar roadways would pay for themselves as well as generate excess revenue. With more support and research, solar roadways could turn into the next big thing that could solve the energy crisis for the US.