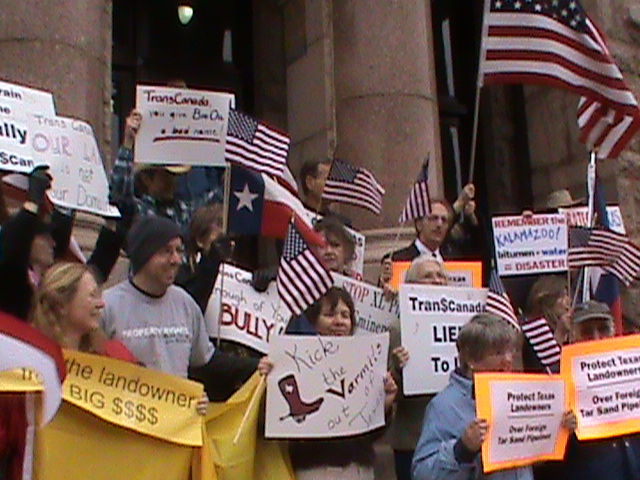 Citizens gather on the steps of the Lamar County Courthouse in support of Julia Triggs Crawford before the TransCanada suit to dismiss her Temporary Restraining Order is heard.

Last week, local citizens from areas bordering the path of the proposed Texas leg of the TransCanada tar sands pipeline, rallied in front of the Lamar County Courthouse where a hearing was scheduled, pitting the Canadian corporation, TransCanada, against a local landowner, Julia Triggs Crawford. The crowd then packed the courtroom leaving standing room only.

Ms. Crawford had asked for a standstill order while in negotiation on her eminent domain case, but TransCanada’s representatives told her they wanted the right to start trenching on her property as early as March 1st.

On Monday, February 13th, Ms. Crawford obtained a restraining order against TransCanada to protect her property.  Within 24 hours, TransCanada in turn filed for the restraining order to be dissolved.  The hearing was held in the Lamar County courthouse  in Paris, Tx on Friday, Feb. 17 starting at 10 a.m. before Judge Bill Harris.

Rally in Paris, Texas on the steps of the Lamar County Courthouse (video by David McFatridge)

In the hearing on Friday, the attorneys for TransCanada displayed what many called an arrogance at the thought of one landowner and her rights, or even the archaeological significance of the property as a means of stopping their project, saying “We will not let one landowner stop this multi-billion dollar pipeline,” and again saying ““They can have their day in court, but they won’t stop this pipeline.”

In the end, Judge Harris handed the Paris area landowner a temporary victory in setting a date of April 30, 2012 for a jury trial to hear her case against TransCanada and their efforts to steal her land away from her for the Keystone Pipeline.

At a rally in Austin, in support of Ms. Crawford’s efforts, the organizations are Independent Texans, Texans for Accountable Government and Texans Uniting for Reform spoke up about the bullying tactics used by TransCanada.

“Everyone wants to know, by what authority or permit does this private, foreign company have the right to condemn property and start construction? We are going to tell TransCanada, don’t mess with Texans, don’t mess with our landowners,” commented Linda Curtis of Independent Texans.

TransCanada’s Keystone XL permit was denied by the president, so the groups and landowners question by what permit or authority does TransCanada take property or start any kind of tar sand pipeline construction?   TransCanada, despite the denial of a permit, continues to bully landowners and execute eminent domain condemnation proceedings. Groups are questioning this company’s right to take land via eminent domain.  The Railroad Commission has stated that it does not have the authority to grant the power of  eminent domain to TransCanada.  Ms. Crawford has also challenged the company’s common carrier status.

Ms. Crawford’s case is emblematic of the continuing struggle along with more than 80 cases in Texas where TransCanada, a foreign pipeline company, has condemned or threatened to condemn private property belonging to Texans.

“This is a private company taking land for private use and foreign profit.  They are cloaking themselves in common carrier regalia and exercising eminent domain against Texas citizens but there is no evidence that they have the legal authority to seize property in Texas,” noted Debra Medina former gubernatorial candidate and director of We Texans.

“We are telling this private, foreign company  ‘Don’t Mess with Texas'”,  “Don’t bully Texans, putting our land and our water at risk,” while this foreign company continues to masquerade as a common carrier.

This is the complete event video of protest and press conference by several Texas organizations representing landowners to show their support of Julia Trigg Crawford of Lamar County whose property has been condemned by TransCanada for their XL pipeline even though the federal permit has been denied.  The organizations are Independent Texans, Texans for Accountable Government and Texans Uniting for Reform

Click here to read the Texas Attorney General’s landowners bill of rights in any attempt by the government or a private entity to take your property.