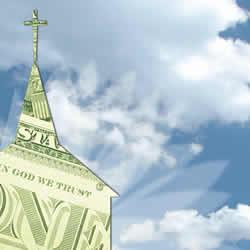 I’ve heard it said that churches are supposed to make bad men good and good men better. Our campaign finance system seems to do the opposite: make good men bad and bad men worse (ie, Governors Richardson and Blagojevich, respectively). As far back as Socrates, outside observers have noticed the corruptive influence of money on public policy. Our public servants worshiping at the altar of campaign donations is sure path to hell for most of us. But the fact that we force them to do so by not providing a public financing system begs the question: Are we getting what we deserve?

As Richardson withdraws his name for consideration of being Commerce Secretary, more and more details are coming out about his ethical problems. Did he take campaign donations that changed his votes? Possibly, or at least there’s enough of an ethical cloud there that no one can know for sure.

And that’s the problem with how we finance our campaigns. No one can ever be truly sure that their Legislators, Representatives, Senators, Mayors, Governors, or Presidents are taking a position because of the merits of the proposals themselves, or because someone with deep pockets convinced them that’s how they should vote. The same can be said of incoming Senatorial appointee Roland Burris. It’s surely not his fault that Blagojevich is a slimeball, but the public just can’t be certain that he was appointed based on his merits alone and not because Blagojevich had some ulterior motive.

The only way to remove all doubt is by supporting public financing. We can only hope during this next Congress that we see some real leadership on this issue so that We the People can know that we are, indeed, still the ones in charge of our government and not the other way around.

Who's got more money?

If Facebook Can Combat Coronavirus Misinformation, Why Does the Company Remain Apathetic About Political Ads?