In an article today by BRENT KENDALL And TENNILLE TRACY of the Washington post, they write that the Supreme Court has agreed to decide whether eight states and other plaintiffs can proceed with lawsuits that seek to reduce carbon-dioxide emissions by utilities. 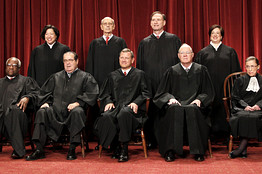 Read more about the Supreme Court, including upcoming cases and details on the justices.

The lawsuit is part of a push by some states for “greenhouse gas” regulations that go further than efforts by the U.S. Environmental Protection Agency. The agency started to develop greenhouse-gas standards after the Supreme Court ruled 5-4 in 2007 that the EPA has the authority to regulate greenhouse gases under the Clean Air Act.

This case, which dates back to 2004, asks whether states and other plaintiffs can use federal public-nuisance law to seek court-imposed limits on the emissions, called greenhouse gases because they trap heat in the earth’s atmosphere.

A New York federal judge ruled in 2005 that the plaintiffs couldn’t proceed because the suits raised political questions that couldn’t be resolved by the courts. But in a win for environmental advocates, the Second U.S. Circuit Court of Appeals ruled last year that the case could go forward.

The private utilities said consequences could be severe if judges can order emissions caps. Such directives “could transform the way the United States produces and obtains energy, limit its supply, dramatically raise its cost and jeopardize reliable service to the public,” the companies said in a court brief.

In a separate brief, the Obama administration said the executive and legislative branches of government should handle carbon-dioxide regulation, not the courts. It also said recent EPA efforts to regulate emissions should displace the plaintiffs’ ability to sue. The administration had asked the Supreme Court to send the case back to the appeals court, but the justices chose to hear it themselves.

In May, the EPA passed a rule to control greenhouse-gas emissions from light-duty vehicles. Starting Jan. 2, the agency will also force power plants, oil refineries and other major emitters of greenhouse gases to obtain permits when making major modifications to their facilities or building new ones.

The plaintiffs in the current case, American Electric Power Co. v. Connecticut, say their lawsuit should be allowed to continue unless the EPA limits greenhouse-gas emissions from existing power plants. Justice Sonia Sotomayor is recusing herself because she was involved in the case as an appellate-court judge.