Solar energy is now more affordable than fossil fuels, even without accounting for the costs to the environment and public health. While creating electricity from solar energy has significantly dropped in price, the cost of producing electricity from coal has increased many places in the world, including the U.S. As a result the solar industry is rapidly expanding.

The cost to install solar is 73 percent lower than prices it was ten years ago, and it is becoming ever more affordable for both homeowners and businesses to install solar. Renewable power capacity has made up more than half of all global additions to the power market each year since 2013. In the United States, solar energy supplied 29.5 percent of all new electricity generation in 2015, and outpaced natural gas-fired generation additions for the first time.  The U.S. market for solar is expected to double in 2016 and here in Texas, wind and solar are each projected to add more capacity than natural gas in 2016.  Longer-term worldwide forecasts are also positive.  The 2015 IEA World Energy Outlook predicts 26 percent of all power will come from renewable energy by 2020 and Bloomberg predicts that 35 percent of all new power capacity worldwide over the next 25 years will come from solar. It is clear that renewable energy will make up a large portion of the energy sector in the near future. 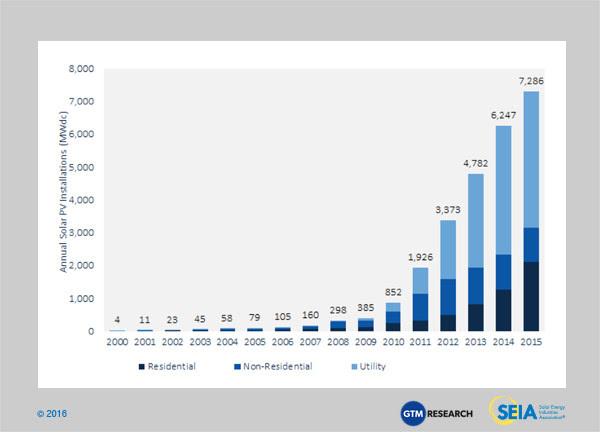 The success of the solar industry is good news for environmental reasons, but also for economic development.  Already there are 208,859 solar jobs nationwide. Texas is one of the top ten states, with 7,030 solar jobs in 2015.

Census 2015 found that the industry continues to exceed growth expectations, adding workers at a rate nearly 12 times faster than the overall economy and accounting for 1.2% of all jobs created in the U.S. over the past year.

Strong growth in solar jobs is projected to continue. Surveyed solar industry employers in the U.S. expect solar jobs to increase by 14.7%, or 239,625 workers, in 2016. A report from the University of California shows that if 20 percent of U.S. energy came from renewable sources by 2020 20 percent and between 101,630 and 154,480 additional energy jobs would be created, compared to continuing with the current energy mix.

In 2015, the world’s largest solar power plant was finished in California after a company obtained a $1.5 billion loan from the government. The Desert Sunlight solar project created 440 construction jobs in the process, provides power to 160,000 homes, and expects a profit of 5-6 billion annually. A combination of large-scale solar projects and increased adoption of distributed solar at homes and businesses will keep solar jobs growing.

The coal, oil and gas industries are watching worriedly as their industries lose market share. Separate from the threat of renewable energy, record low oil prices in 2015 led to a loss of over 233,000 jobs in the oil and gas industries globally. The coal industry is experiencing a similar loss of profit, as earnings fell 25 percent in 2015 and coal mining jobs in the United States decreased by 4,000 between 2008 and 2013.  Coal industry losses are more directly attributable to environmental regulations, which make burning coal more costly and thereby encourage the shift to renewable energy.

Instead of embracing the shift from fossil fuels to clean energy, one that we desperately need for the sake of the planet and public health, as an opportunity for economic growth and job creation, conservatives with a stake in oil and gas are doing everything in their power to slow the rise of solar.

The Sunshine State ranks just 16th in solar production despite its high capacity to generate solar power because fossil fuel companies have worked to prevent the solar from gaining ground. Fossil fuels maintain a monopoly on utility companies, lobby for the state to put anti-solar policies in place and discourage solar through preventing companies and residences from selling excess power from solar panels and forcing those with solar panels to pay special fees on their utility bill. Therefore, most of Florida’s electricity, 84 percent, comes from gas and coal. It’s a losing war that the fossil fuel companies are waging though. Fossil fuel companies are fighting green energy tooth and nail, but the market trends are clear, and solar is ever expanding.

One of the most important victories for solar and wind was the extension of the solar energy investment tax credit through 2019. This is going to be very important in spurring on expansion of the solar industry as residences and commercial businesses will continue to get the 30 percent tax credit on solar energy projects, which was set to expire at the end of 2016. Bloomberg Finance predicts that because of the tax credit’s extension more “solar power will be installed over the next five years…than the total installed in history up to the end of last year.” Renewable energy is going to have the fossil fuel industry running for the hills.