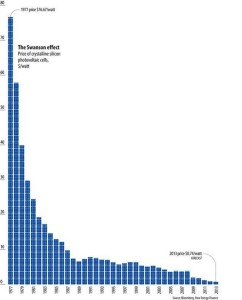 All over the U.S, the price of going solar has been falling dramatically. The price for one watt of photovoltaic panels has fallen from $76.67 in 1977 to as low as $0.50 in 2013. Other items such as inverters and wiring make the rest of the so called hard costs of going solar, which according to the National Renewable Energy laboratory, come to a total of $1.76 per watt. The rest of the average $5.00/watt that residential customers in the U.S pay for solar comes from “soft costs”.

While hard costs have been consistently falling, soft costs have not undergone such a radically change. In fact, soft costs now make up over 64% of the total price for a residential solar system. Rebates programs in some areas help to offset these soft costs and to make solar affordable enough for the average home owner, but that isn’t a sustainable model. Controlling these soft costs is key to creating a competitive and thriving solar market in the United States.

Solar is already cheaper in places like Germany, where the average total cost per watt is as low as $2.56. An average U.S system costs nearly twice as much, even though hardware costs are the same in both countries. So what are the areas that the U.S solar industry can improve upon?

The largest solar soft costs in the U.S come from supply chain management, both physical and financial. Supply chain issues represent 11.7% of the total cost of solar, or about $0.61/watt. Transportation and storage costs in the U.S tend to be higher than in Germany. This has a lot to do with the fact that the U.S is a large country with a fairly spread out population, compared to Germany. Solar companies often cover large geographic markets, which requires them to ship their hardware across equally long distances.

The solar market in the United States, while certainly starting to take off, is still fairly young. This means that most solar companies spend a lot of time and money on customer acquisition, about $0.48 per watt in fact. In Germany, the solar market is very mature. Most people understand the benefits of solar, and need very little convincing. Customer acquisition can be as low as $.02 per watt in Germany. In the U.S, these costs will surely fall as the solar industry matures and goes mainstream. But for right now, solar markets in the U.S are very regional specific, and awareness is still pretty low.

Another barrier to cheaper solar in the U.S is the inconsistent and sometimes excessive regulations for rooftop installations. U.S solar installers spend as long as 22.5 hours on complying with regulations for a single installation. In Germany, the same process is uniform, and only takes about 5 hours. Permitting and compliance adds $0.28 per watt to the cost of solar in the U.S, and only $0.03 in Germany. But perhaps the biggest issue with this cost is the fact that inconsistent regulations can deter the formation of new markets. U.S solar companies that try to cover a large geographic range have to deal with numerous different regulations at the local and utility level. This can become a huge task that only the largest solar companies are able to take on. A uniform system of regulation in the U.S would directly reduce costs, and possibly spur market growth that would drive other costs down.

While some areas of soft cost are easy to single out, determining every influencing factor is proving quite difficult. The National Renewable Energy laboratory found an extra $1.61 of soft costs that were unaccounted for in their analysis between U.S and German PV prices. These extra costs were attributed to business overhead. The NREL concluded that more studies are needed, but recommended a few policy ideas that would go a long way to reducing soft costs.

Governments and business alike should focus on encourage a large and durable market size, minimizing market fragmentation, simplifying regulations, and tying subside reduction to declining hard costs. Essentially, the creation of an economically sustainable solar industry in the U.S will depend on the implementation of sound policy thats geared towards these goals.