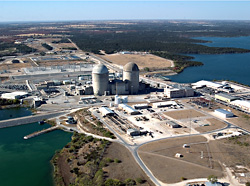 In an era dubbed a “nuclear renaissance” by the nuclear industry and during which the Bush Administration has pushed one package of subsidies after another, the Nuclear Regulatory Commission (NRC) has indicated that they expect up to thirty applications to be filed to build additional nuclear plants.  Currently, five or six of those proposals are moving through the complicated multi-stage process.  Of these early applications, three of them (for 6 nuclear units, 2 per application) are proposed for Texas.

One of these applications is for Comanche Peak Nuclear Power Plant, located four and a half miles northwest of Glen Rose in Somervell County and about 80 miles southwest of downtown Dallas.  Luminant (formerly TXU) filed an application September 19, 2008 to build two additional nuclear units on this site.

The Fort Worth Weekly summarizes the history of Comanche Peak:

The process of building and licensing the original pair of reactors at Comanche Peak turned into one of the most contentious – and frankly scary – developments that North Texas had seen in many years. By the time the plant was finished, it had come through major problems in the construction process, was hugely over budget and more than 10 years behind schedule, and had gone through a hard-fought licensing process that many believe added greatly to the safety of the plant. During that process, activists often questioned the objectivity of the NRC inspectors involved.

Given the problematic history of this plant’s previous licensing process, one would think that the NRC would take particular care in making sure the public felt included in the process. But environmentalists, concerned citizens and the media were caught off guard when federal authorities waited until Christmas Eve to send out notice of a public hearing on the proposed expansion scheduled for January 6th.

Officials confirmed that electronic notices of the Jan. 6th meeting were sent Wednesday, Dec. 24th. In defense of their timing, the NRC pointed the media to an online news release dated Friday, Dec. 19th. Though dated for Friday, the release was not actually posted to the website until Monday, Dec. 22nd.

The notification system is supposed to let interested parties know when these events are occurring in a timely fashion.  Burying the notice on Christmas Eve hardly holds to this standard.

Citizens who wish to comment at the hearing are required to register by tomorrow.  They may also register at the hearings, as long as they show up at least five minutes before the hearings begin. Unfortunately, individuals who have failed to give prior notice may be given a limited amount of time to speak.

The agency is also taking written comments on its environmental impact statement up to Feb. 17th.  But even that may be a short time-frame for fashioning an effective response to the NRC’s lengthy draft report (available at the Somervell County Library, 108 Allen Drive in Glen Rose, and at the Hood County Library, 222 North Travis St., in Granbury).  Both of these libraries were closed Christmas Day and will of course be closed New Year’s Day, shortening the amount of time available for public access to these reports.  You can download a copy of the report from NRC’s website, but it consists of 320 documents, some as small as a few kilobytes, but some as large as 2.65 mb.  For the uninitiated, look specifically at Part 3: Environmental Report of Luminant’s transmittal letter for Comanche Peak COLA.

These public hearings are no minor matter. They will initiate the process of determining the environmental impact of doubling the plant’s nuclear fuel cycle – including the question of what to do with dangerous spent fuel rods.  The building that now houses the spent fuel from the plant’s operation was originally designed to hold the waste for seven years before it could be trucked off to a permanent waste location. Two decades later, the federal government has yet to find an appropriate long term disposal site. Comanche Peak, like all nuclear plants in the country, is storing the highly radioactive material in crowded spent fuel pools onsite.

The public deserves the opportunity to have their questions answered and give input on the proposed expansion. Unfortunately, the timing and manner of the notification makes it seem as though this new plant is being shoved down our throats.  The NRC and the nuclear energy industry need to do better than this.

To read a compilation of articles written about this plant between 1984 and 2007, check out Nuke Free Texas.  I’m not sure which article is my favorite, the one reporting an incident regarding a drunk security guard found on the roof, or the report of the proposed fine “for intimidation and harassment of quality control workers.”