While we’ve all grown accustomed to seeing the words “natural”, “healthy” and “environmentally-friendly” thrown around in advertisements for a variety of consumer goods, it’s important to remember that household items are not the only things capable of being greenwashed – case in point, natural gas.

The word “natural” has been used to connote things such as ‘green’, ‘healthy’, ‘non-toxic’. Many people’s cursory understanding of natural gas is that if it’s “natural”, it must be good, right? Unfortunately the truth about natural gas is more complicated. While it is true that natural gas emits far less CO2 than coal upon combustion, there are a host of other ‘fine-print’ problems that come along with the switch, most notably, fugitive emissions.

Fugitive emissions are the emissions not intended to take place and that usually result from pressurized equipment leaks. While these leaks are relatively tiny, when expanded to a large enough scale the amount of methane being leaked into the atmosphere can have a large impact on climate. While the EPA originally reported that average leakage rate in natural gas production was somewhere around 1.5%, a collaborative study by scientist from several universities and government agencies released this past October revealed that the figure should be much closer to 3%. Even worse, there have been reports of methane leakage upwards of 12% at some production sites.

Many climate change mitigation plans focus on reducing CO2 emissions, but methane and its effects should not be overlooked. The IPCC has reported that over a 100-year period, methane is 35 times more potent of a heat-trapping gas than CO2. When looking at the effects of methane over 20 years, this figure jumps to 87. Suddenly, that comparatively small amount of methane being leaked out of wells, pipes and valves is incredibly important. In other words, 1 ton of methane being released into the atmosphere has the same heat-trapping effect over a 20 year period as releasing 87 tons of CO2. 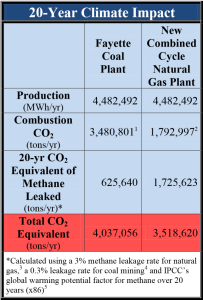 While the CO2 emissions from burning natural gas are about half what is produced by burning coal plant to produce the same amount of power, after accounting for fugitive emissions and converting leaked methane into CO2 equivalent (using the IPCC 87x factor referenced earlier), natural gas climate change impact is almost as bad as coal.

Fugitive emissions seem relatively small, but it’s important to remember that they are difficult to control and ‘fix’, as they occur at virtually every stage of the natural gas extraction and distribution process, and can result from tiny imperfections in very expensive equipment, and the always present problem of human error. Despite the intense heat-trapping ability of methane, the EPA does not currently have a cap on methane emissions, which makes it easier for these very real and potent emissions to slip between the cracks of regulation.

Texas, along with the other south central states (Kansas, Oklahoma), is already emitting 5 times as much methane as the rest of the country. With the IPCC reporting methane as a super potent greenhouse gas, the implications for microclimate change in this area of the country are particularly salient. In a region that regularly deals with ultra-hot summers, droughts and hurricanes, the added heat-trapping effect of methane could lead not only to warmer and more volatile weather, but the trappings that come with it, including loss of life, property and revenue.

Natural gas is problematic for a number of reasons, including the process to attain it, and it is for these reasons that Public Citizen is against the Austin Energy proposal to build a new natural gas facility.  Natural gas is only a significant improvement from a climate change perspective if it were to exist in a perfect world where every tiny bit of methane made it to combustion instead of leaking into the environment. While we laud the motivations of Austin Energy to slash emissions in the energy sector, Austin deserves truly clean, sustainable energy, like wind or solar, not just a wolf in sheep’s clothing.

Please consider attending one of Austin Energy’s stakeholder meetings this week to tell them you prefer clean renewable energy to fossil fuels.