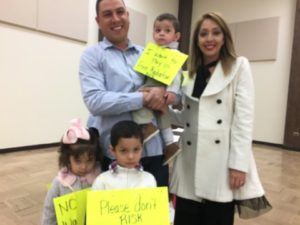 This was an amazing week of organizing in West Texas / New Mexico. Lots of people and organizations came together to work toward halting the radioactive waste dumping threat. Waste Control Specialists (WCS) wants to dump 40,000 tons of this deadly waste, parking lot style, and store it for 40 to 100 years in the desert, where climate extremes and fracking abound. What could go wrong?

This week there were two Nuclear Regulatory Commission (NRC) hearings on the radioactive waste storage license for Waste Control Specialists, one in Hobbs (Feb. 13th) and one in Andrews (Feb. 15th). The message came through loud and clear from local and regional folks – WE DON’T WANT IT!   The Department of Energy (DOE) tried to tell the rest of the country that Andrews wants this waste – but the people in targeted communities never got to vote. The Andrews County Commissioners took action with a resolution that hardly anyone knew about until recently, which is not informed consent.

A local activist who lives just outside of WCS’s site and her family have been speaking up and taking action for years. She spoke to the Mayor and City Council of Eunice on Valentines’ evening, and spoke at both the Hobbs and Andrews NRC meetings – on the 13th and 15th.  Eunice is the closest city to the WCS site – only 5 miles away. The proposed Eddy Lea Energy Alliance (Holtec) consolidated storage project would be nearby as well.

Another concerned citizen has led efforts in Andrews for two years now.  He was joined by an 80 years old newly minted activist who is  full of life and fire. A young Mom from Andrews.  her family and friends have now jumped in and become involved, and others in the community are speaking out now as well. Former State Representative Lon Burnam has made numerous trips to the West Texas region to organize and connect people.

Citizens in Midland and Odessa organized two local meetings and a press conference, and then participated in both hearings. They made a huge impact too, and have raised concerns about the risk of radioactive waste trains and water contamination. A local artist gave a beautiful and empowering speech in Hobbs and brought friends in from Roswell.

Diane D’Arrigo from Nuclear Information and Resource Service and Kevin Kamps from Beyond Nuclear were invaluable, helping get information out to concerned citizens, speaking powerfully and providing detailed accurate information to reporters. We’re so grateful to them for their key role and for coming all this way to help out.  Tom “Smitty” Smith and Public Citizen were also key in organizing, strategizing and getting materials and information out.

The star of the night in Andrews was young man who took the microphone and spoke boldly, with his mother supporting him with an arm around him. It was moving and powerful.

WCS had speakers at the hearings, but many were employees or people who seem likely to have had contracts or financial benefit. The usual backers, such as the Andrews Industrial Foundation, went to bat. The WCS folks outnumbered us, but we were strong in numbers, organized, vocal and clear in our message – an amazing feat in towns where this type of organizing hasn’t happened in recent history. It’s been an honor to know and work with everyone involved, and to learn so much from amazing local folks! There will be future organizing meetings going forward and everyone is invited.