As we’re all aware, weather is never static. Weather conditions and patterns are always changing and are difficult to predict. One very recent example of this is the El Niño Southern Oscillation (ENSO). ENSO is a cycle of warming and cooling events in the equatorial Pacific Ocean and the atmosphere above it. These periodic events take place over roughly 2-7 year intervals. The resulting variability in oceanic and atmospheric temperatures has a range of effects on seasonal precipitation and temperature patterns across the world.

With ENSO, the cycle can shift form its neutral or normal state, to a warm phase – El Niño, or a cool phase – La Niña. We’ve been in one of the strongest El Niño phases on record for the last 2 years. During El Niño, the typical East-to-West winds weaken in the equatorial Pacific, which drives warm waters from the western Pacific to the eastern Pacific. This causes warm ocean surface temperatures and heavy precipitation in northern South America, and dry conditions in Australia and Indonesia. 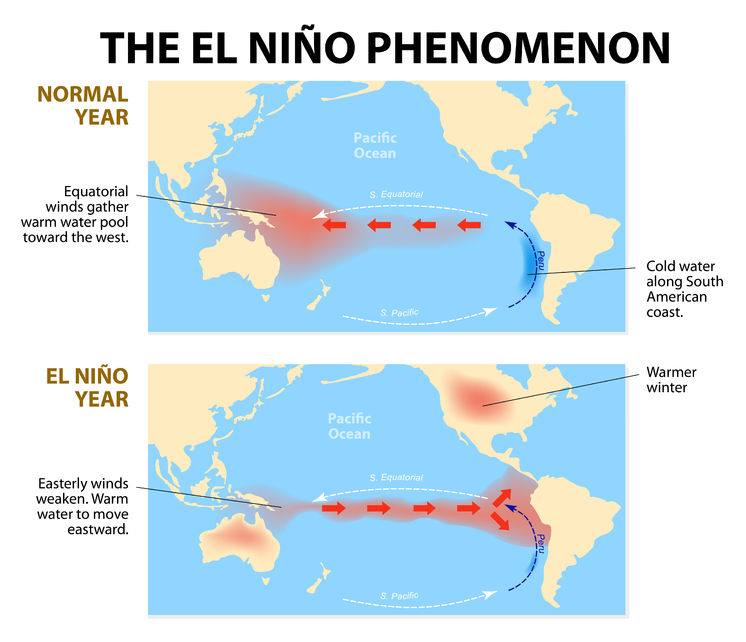 With the El Niño phase we’re currently in, there have been a lot of extreme weather phenomena. The monsoon rains weakened in India, resulting in food shortages, West Africa has been in a drought, Australia experienced record heat, Brazil experienced excessive rains, and the northern hemisphere winters were warmer than usual. For Texas specifically, there’s been increased precipitation events, making 2015 Texas’ wettest year on record. 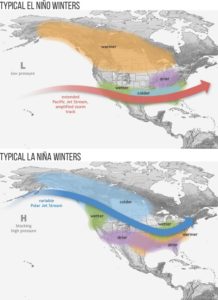 This month though, scientists from the National Oceanic and Atmospheric Administration (NOAA) have issued an official “La Niña Watch.” They predict that El Niño will phase out in late spring or early summer, and will shift to La Niña for the fall and winter. So we can soon expect to see generally opposite conditions than we have been experiencing with El Niño. 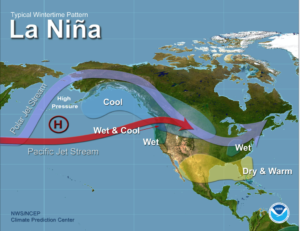 During La Niña winters, the U.S. experiences dry and warm conditions in the southern states, but wet and cool conditions in the Pacific Northwest and northern plains. We can expect there to be a lot of snow in the Pacific Northwest while there’s drought in California and Texas. In previous La Niña periods, the lack of rainfall negatively impacted Texas water supplies and crops. With La Niña, there’s also an increased chance of Atlantic hurricanes since the temperature and moisture flow associated with it creates ideal conditions for hurricane formation.

If the weather is always undergoing different cycles and is constantly changing, then why does an upcoming La Niña matter? Shifts in precipitation and temperature patterns alter crop production abilities, which will impact the prices of goods all over the world. Various commodities will be affected by the upcoming La Niña: