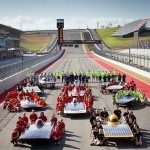 Come out and support your favorite team! This week, the Circuit of The Americas is hosting American Solar Challenge and Formula Sun Gran Prix for solar cars.

The American Solar Challenge is an 8 day, 1700+ miles distance race from Austin TX to Minneapolis MN that tests how long each car can run under specific specs for the car. The Formula Sun race, hosted at the Formula One track in Austin, is a qualifying race with a focus on maneuvering around curves and corners while trying to complete the most laps.

The Formula Sun race takes place July 17-19th   with doors open from 8am-9pm. The first two days are dedicated to prequalifying rounds and the 19th is the actual race to determine who wins and also who qualifies for the American Solar Challenge.

There will be 23 teams, including the University of Texas, who will race spaceship looking solar cars with a speed limit of 65mph. The event does not allow camping on the premises, but is free for the public to watch and root for their favorite team which is mostly colleges and universities from around the country.

There will be a children’s solar car workshop on the 19th about every hour during the day where they will be able to build and race small model solar cars.

If you and your family are interested in weird looking sustainable cars racing around the Circuit of The Americas then this event is one to mark on your calendar.

"Clean" cars are not all created equal

Continue to the site