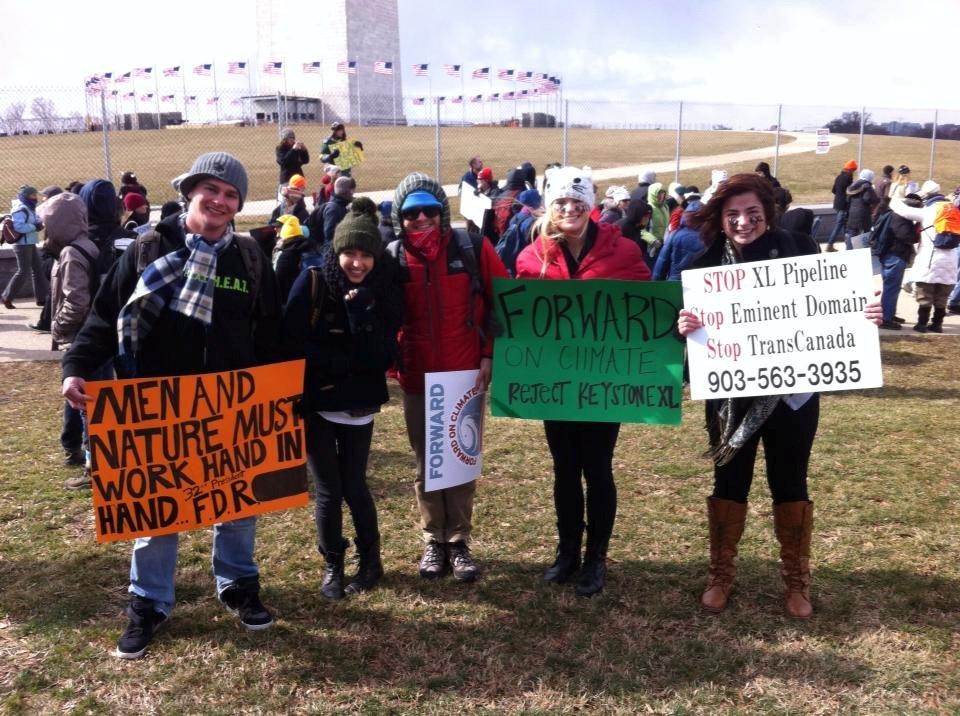 I have been a Public Citizen intern since January of this year.  As a Political Science graduate student, in both Undergraduate and Graduate studies I have been immersed in the political process and the theories behind the ideas that have formed our nation.  When I was a bit younger, I dabbled in political activism, with issues like civil rights and equal rights, which are still very near and dear to my heart.  But, I never took the plunge into becoming a full on activist.

Thursday, February 14th, I had the opportunity, through Public Citizen and The Sierra Club, to get on a bus with 48 other Texans and make the long trek to Washington D.C. for the Forward on Climate Rally.  I had been to D.C. several times before, but never for a cause.  Our bus departed from Austin, Texas and made stops in Dallas and Tyler.  At each stop, new people joined us.  Each person on the bus had their own reasons for engaging in this somewhat grueling 30 plus hour bus ride.  Each person was motivated enough to take time out of their schedule and commit to a less than comfortable ride on a bus to our nation’s capital.

In the early part of our journey, many people did not know each other.  Many of us were coming from different places geographically and in life.  As the hours wound on, conversation and ideas began to flow on the bus.  People began to relax and conversations began to percolate throughout the bus.  After the formalities, discussions began on why we were on this trip.  There were people directly affected by the Keystone Pipeline.  Others were concerned with climate.  Some were just champions of the Earth.  For quite a few of my fellow bus riders, activism was old hat.  Others, such as one older, retired gentleman, still were hesitant to call themselves activists.  Some were believers in the cause, but just there for the exchange of ideas and to observe.  But, within the varying reasons for attending the trip, a common thread was clear.  Something needs to be done about climate change.  That was something everyone could agree upon, regardless of what school of thought they were coming from.

As for me, when I got on the bus, I did not really know which one of these types I was.  Climate change has always been a concern to me.  I try to live a “green” life.  I knew the Keystone Pipeline was bad news from things I had read and heard, but I suppose that I was never mad enough to do anything about it.  For me, civil rights and related social issues had always been the most important…

As the trip wore on, we all began to become friends.  We shared experiences and ideas.  By the time we arrived in D.C., we were no longer a bus full of strangers.  There was a feeling that we were a team, and some of us had become quick friends.  Our group spanned many different generations and encompassed many different levels of involvement in the cause.

Friday night and Saturday, through some downtime and tourism, the group continued to solidify.  Our bonding was increased through a night on the town and sightseeing, but the main event was yet to come.

Sunday, February 17th began by loading on the bus and heading to the Public Citizen D.C. office for breakfast and some interviews with a reporter.  Outside, the cold was biting, with a wind chill of 6 degrees.   As we prepared to depart for the National Mall, the excitement level was high despite a lack of sleep and the cold weather. 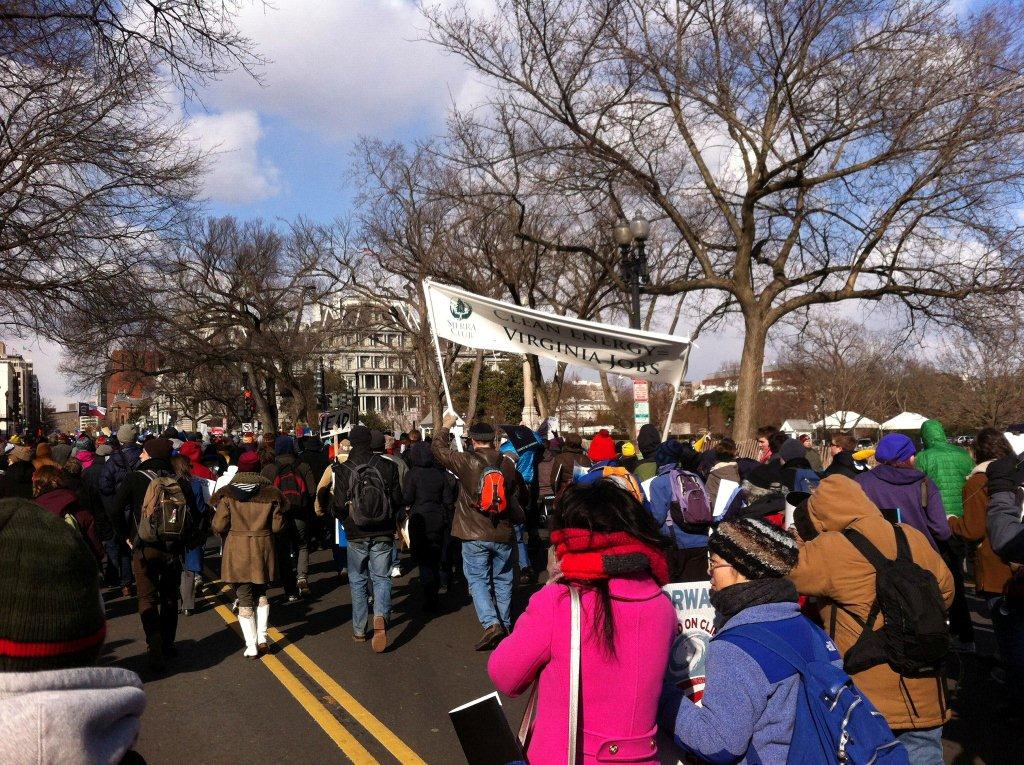 We arrived near the Washington monument to a sea of busses.  Hundreds of busses.  We arrived about an hour early, and there were people as far as the eye could see ready to participate in democracy.  The estimates of number of people at the Forward on Climate rally ranged from 35,000 to 50,000.  As the rally began, speakers began to deliver messages from many different points of view.  Some were directly affected by the pipeline, other were speaking of climate change and activism.  The excitement level of the crowd increased with every speaker.  The climax of the rally was the 10’s of thousands of us marching to the White House.  The street was packed from curb to curb all the way around the White House.  We now know that President Obama was playing golf with Tiger Woods and oil executives, so he did not see the awe –inspiring site of that many people united for our climate.  Everywhere you looked there were signs.  When you stopped to listen, you could hear chants that would begin with one person and end with a united crowd chanting in solidarity.  While marching around the White House, you almost forgot how cold it was. (It was really cold)  When we returned to the National Mall, I had a sense of accomplishment.  You could not help but feel that we had done something important, united together as a group as varied as any ever assembled.  People of different ages, races, economic backgrounds, and geographic locations; all united in for the planet.  It was then that something I should have realized all along dawned on me.  Climate change and human/civil rights are intertwined.  They are so deeply related, that it is almost hard to see the preverbal forest for the trees.  Without one, there cannot be the other.  It also dawned on me that this is the fight of our generation.  This is the legacy that we should pass on to our children and their children. Our Earth and our climate is intrinsically a human right.  If we do not take action, there may not be an inhabitable planet for future generations, which would be the greatest violation of human rights in our history.  Through the interactions on the bus, the speakers, the sights and the sounds, something that should have been painfully obvious to me was finally made clear.

We cannot be passive observers in this fight against climate change.  We cannot be passive observers in things like the Keystone XL, even if we think they do not directly affect us.  (It does)  The time to remain silent is gone.  It is time to call on everyone who knows these things are terrible to use their voice, their right to free speech, and the democratic process to put an end to this insanity.  The Earth cannot wait while we sit idly by and do nothing while corporations destroy her under the guise of “progress” and “economics.”  We need to stand up and let them know that we will not stand for irresponsible practices and violations of our planet.  We must activate to preserve our climate and Earth for future generations.  We must let President Obama know that we won’t stand for the Keystone XL.

For me, it is now no longer an option to passively oppose what is going on.  Activism is now a necessity.   I would urge everyone to use their voice, stand up and be heard.