Ask most people what they think the Texas Railroad Commission (RRC) is in charge of and most people will reply that it is railroads. Most people would also be surprised to discover that it is in fact, the wrong answer.  The RRC actually oversees the oil, gas and coal production within the state.  Ending this source of confusion by changing the name to something more appropriate seems like a no-brainer. This session, HB 237 attempts once again to change the name – to the Texas Energy Resources Commission, a name more in line with the actual work the commission does. HB 1818 offers a few of the reforms the RRC needs, but does not go nearly far enough.

Email your Texas State Representative to ask that he or she support amendments to HB 1818 that will offer real reform at the Railroad Commission.

The Railroad Commission is 125 years old, making it the oldest regulatory agency in the state. When the commission was formed in 1891 its main job was to regulate the rail industry.  Once the Texas Oil Boom started the commission’s responsibilities were expanded to include regulating oil and gas. Over the years, as oil and gas became more dominant and railroads became less, most of the non-energy functions like the railroads were eliminated.  By 2005, when the RRC lost the last of any responsibility to regulate the railroads, its name became truly obsolete 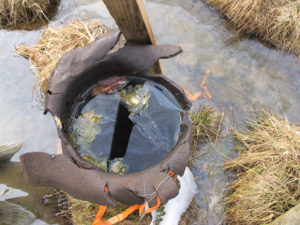 One of the RRC biggest responsibilities is to cover the cost of plugging abandoned wells.  The way the RRC attempts to do this is by requiring companies to buy either individual or blanket bonds as insurance to cover the cost of plugging an abandoned well before they can drill. The cost of plugging a well is about $5-17 per foot for an average well. Unfortunately the bond cost has been stuck at the 1991 figure of $2 per foot. Bond funds usually cover only about 15% of the total cost to plug a well.  So in the end, the commission is only collecting a fraction of what is needed.  Last year the commission collected on average about $2,707 per well but spent about $17, 012.  That is an enormous discrepancy and therefore many of the wells remain unplugged. By the end of 2016, the total number of abandoned wells in Texas passed 10,050.

The environmental impact of unplugged wells is far reaching.  In Texas there are estimates that put over 50,000 improperly or not plugged wells.  These wells are often drilled over 1 mile deep and, if left unplugged there is the potential for salt water (4 times saltier than the sea) which is often full of heavy metals and radioactivity materials to flow up and seep into the surrounding land and into the fresh water aquifers.  Abandoned or improperly maintained wells retain their potential to kill the land and crops around them and taint the water supply for years. To properly close a well, hundreds of feet of cement must to be poured into the well at various levels.  SB 1803 would increase bonding requirements to ensure that unused wells are plugged.

Without a new statute that allows the commission to set realistic bonds based on the actual cost of plugging a well, this problem with continue to grow.  In addition, the oil and gas industry is in a slump right now with oil prices low and production down, which of course means that the revenues it generates is down and since the RRC gets most of their funding from fees, it will definitely make it even more difficult to do their job.

Weak fines do not provide a strong enough deterrent to keep companies committing the same infraction over and over again. This can be clearly seen in the fact that over the past five years a mere 114 operators, representing only 3 percent of all the wells in Texas, have been responsible for over 22 percent of all the pollution related violations. If the RCC would increase its penalty for infractions that were set in 1983, from $10,000 a day to a relative current value of $25,000 a day, it would do much to discourage companies from repeatedly violating regulations.  SB 567 would bolster inspection enforcement and would increase revenue by increasing fines.

The RRC is also in charge of inspecting all currently active and inactive wells within the state. This is a rather arduous task, considering that there are hundreds of thousands of well. The Texas inspector to well ratio is 2,340 active wells per inspector, one of the worst in the country.  In contrast, Alaska, a state that is also heavily petroleum based, has an inspector to well ratio of 370 to one! Due to insufficient numbers of inspectors, the Texas Sunset Commission reported that in 2015 only about 30% of all wells and only about 42% of active wells can be were inspected. They found that in 2015 more than two thirds of leases had not been inspected for at least two years and each lease can have thousands of wells on it. SB 569 would take the first step in fixing this, requiring the RRC to submit review of its policies on reporting and enforcement in a study by this September 2017. But, in the end, the of only surefire way to reverse this shortcoming is that the RRC must drastically increase the number of inspectors. To help offset the cost of hiring so many additional inspectors, an annual inspection fee should be instituted.

The Railroad Commission desperately needs to modernize itself when it comes to public access to important information about oil and gas wells. As far back as 2011 the Legislature gave the RRC $16 million to help update their systems and make information easier to access, but, as of today, the RRC still does not have a comprehensive and easily searchable database for the public to look up complaints, violations, or penalties levied against oil and gas companies. Without an adequate system, it is very difficult for Texans to learn information about potential dangers to both their lives and their livelihood. This can impact everyone from a community trying to discover if the wells that operate outside their town are complying with regulations, or for the family moving to a new home who might want to see whether the well that operates just outside of their new property has repeatedly leaked dangerous pollutants. Inspections, complaints, violations, and enforcement actions should be accessible on a public website and searchable by operator, drilling company and or by the well, all year around. While HB 1818 includes nothing about this incredibly necessary function, HB 247 would greatly improve transparency.

Another problem the RRC deals with, is the monetary influence that a company or individual can have on a commissioner who is seeking office.  While the RRC Commissioners were originally appointed by the Texas Governor, this was changed so that each of the three would be elected through public elections. And while greater accountability to the public is an improvement, it does come with its own set of potential issues that the current structure of the RRC fails to take into consideration. According to our own research here at Public Citizen, between 75-90% of all contributions for RRC Commissioner elections come from the very entities that the RRC is supposed to regulate, and much of it comes during non-election periods. In addition, Texas is one of the only states in the country that does not prohibit potential candidates with conflict of interests from running for Commissioner.

To address this situation, HB 464 would ban contributions during non-election years and prevent commissioners from taking any contributions from entities with contested case hearings pending before the RRC. Rules should also be added that officially require candidates to disclose any potential conflict of interests and only allow them to run if they can clearly demonstrate that they have resolved any conflicts.

All of these proposed changes to the way the RRC functions are crucial to make the agency operate in the interest of all Texans. Email your Texas State Representative to ask that he or she support amendments to HB 1818 that will offer real reform at the Railroad Commission.