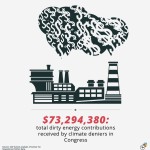 The Energy and Policy Institute just released a new report that traces the electric utility industry’s early knowledge of the climate change risks of burning fossil fuels as far back as the 1960s:

The report also shows how despite this early knowledge, some electric utility interests chose to engage in ongoing efforts to sow doubt about climate science and block legal limits on carbon dioxide emissions from power plants.

This trend is especially disturbing in light of the fact that the recently published list of potential names for the Science Advisory Board and the EPA Clean Air Scientific Advisory Committee includes many industry representatives and consultants. The panels are typically composed primarily of independent academics and researchers charged with reviewing agency science and advising the Environmental Protection Agency on major policy decisions.

While industry has always had a voice on those panels, comments from the Trump administration and the potential new appointees suggest the balance may soon change in favor of greater power for regulated companies, particularly the oil and gas industries.

The list of potential new advisory board members includes officials from Exxon Mobil, Phillips 66, Alcoa, Noble Energy, Total, and the American Chemistry Council, a lobbying group for the chemical industry.

Here are a few of the key findings from the Energy and Policy Institute’s report:

Read this report and join the conversation on Twitter using the hashtag: #UtilitiesKnew