The following sites have had serious radiation leaks: 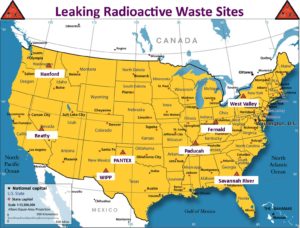 Radioactive exposure can lead to birth defects, cancers or deaths.

Radioactive accidents or leaks can lead to water contamination and billions of taxpayer dollars for never-ending cleanup.

Dangerous radioactive waste could be coming to your community soon.  For the health and safety of your children and grandchildren, join us…

Speak out at one or both of the NRC public meetings and request a public hearing:  (Open House will be at 6 pm)

Find the WCS License Application at www.regulations.gov and search for Docket ID NRC-2016-0231.

For more information go to: www.NoNuclearWasteAqui.org