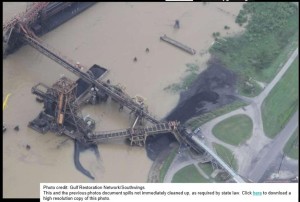 The terminal, owned by United Bulk Terminals Davant LLC, has operated for more than four decades, shipping millions of tons of coal and petcoke – an oil-refining byproduct with high levels of arsenic, mercury and other toxins hazardous to human health and aquatic life – every year to overseas markets.  But before they are shipped, that coal and petcoke sits in huge, open piles along the river, and blows right into the river and the wetlands when there is rain or wind.

The suit contends that United Bulk has illegally discharged coal and petcoke into the river every day that it has operated for at least five years. It points out that coal and petcoke have been discharged into the river in enough quantities to produce visible spills on a regular basis. The suit also cites the EPA’s determination that storm water runoff from coal piles “can flush heavy metals from the coal, such as arsenic and lead, into nearby bodies of water.”

The international market for U.S. coal has also grown increasingly volatile. Port authorities on the West Coast and in Corpus Christi, Texas have concluded that the coal export market is simply too risky to invest significant sums in new or expanded shipping facilities.