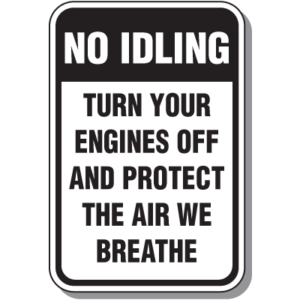 Bexar County has joined the other 44 communities in the state of Texas limiting idling by heavy vehicles. The primary reasoning for the ordinance to try to avoid ground level ozone levels that warrant non-attainment status for the county by the Environmental Protection Agency (EPA). Nitrogen oxides (NOx) emissions from vehicles combine with volatile organic compounds (VOC) in the air to create ground level ozone, which can cause or worsen respiratory diseases, such as asthma.

Non-attainment status refers to “any area that does not meet (or that contributes to ambient air quality in a nearby area that does not meet) the national primary or secondary ambient air quality standard for the pollutant.” The county’s decision to limit emissions via prohibiting idling is logical because the decision limits emissions from those passing through the county rather than limiting emissions by its residents. Non-attainment status is established by the Clean Air Act and has multiple consequences that act as incentive to reduce ozone levels that affect the health of a county’s citizens. Consequences include loss of federal highway funding and EPA oversight over air pollution permits. While this measure is not expected to keep Bexar County in compliance once the new ground level ozone standard goes into effect, it will help.

Idling limits for heavy vehicles are also important because most of them are diesel fueled and produce particulate mater that is harmful to health. The very small particles in diesel exhaust are composed of elemental carbon, which absorbs other compounds and caries them deep into your lungs. Diesel particulate matter is linked to respiratory and cardiovascular diseases and is potential human carcinogen.

The Bexar County decision follows after Houston, the state’s largest city, approved a similar ordinance that limits vehicles weighing more than 14,000 pounds to five minutes of idling. Heavy vehicles include semi-trailer trucks and school buses. Idling school buses are of particular concern because children are especially vulnerable to the impacts from diesel exhaust.  The Bexar County court order allows buses to idle for up to 30 minutes though. The order also includes many other exemptions and should be revisited in the future to better protect public health.

Idling limitations are protected by the Locally Enforced Vehicle Idling Limitations Rule, established by the Texas Commission on Environmental Quality. The rule limits the idling of heavy vehicles of jurisdictions that have signed a Memorandum of Agreement with the TECQ for the local enforcement of idling restrictions. The Locally Enforced Vehicle Idling Limitations Rule was established in 2005 and with the addition of Bexar County, 45 communities have adopted idling limitations. The city of San Antonio is also set approve a similar measure later this month.

"Clean" cars are not all created equal