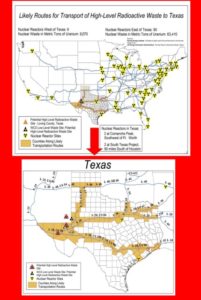 A high-level consolidated radioactive waste storage site has been proposed for Andrews County, Texas, by Waste Control Specialists (WCS). The company expects to submit a license application to the Nuclear Regulatory Commission (NRC) and to have licensing and construction completed by the end of 2020.

“This plan is all risk, not only for the states of Texas and New Mexico, but for the whole country and it should be halted immediately,” said Tom “Smitty” Smith, director of Public Citizen’s Texas Office. “Why is our region being targeted to become the nation’s dumping ground for high-risk high-level radioactive waste? Putting this waste on our highways and railways invites disaster. Radioactive waste moving through highly populated cities across the country could be targeted for sabotage by terrorists.” A state report, the Assessment of Texas’ High-Level Radioactive Waste Storage Options, says that “spent nuclear fuel is more vulnerable to sabotage or accidents during transport than in storage because there are fewer security guards and engineered barriers, and that the consequences could be higher since the waste could travel through large cities.“

“Counties along the potential transport routes for high-level radioactive waste should have a voice in whether there is consent for this plan,” said Dallas County Commissioner Dr. Theresa Daniel. “While a single county in West Texas might gain financially from bringing in the nation’s high-level radioactive waste, other counties would have increased risks of accidents and terrorist activity.  Counties need to assess their financial liability and the costs they could incur for expanded emergency preparedness. “

Bexar County Commissioner Tommy Calvert echoed Dr. Daniel’s concern. “Shipping this waste though our county is “ all risk and no reward”.   Our county and others along the way would have increased risks of accidents and given the concentration of military facilities in San Antonio we are potentially at higher risk of terrorist activity. Counties along the potential transport routes for high-level radioactive waste should be able to either consent to or deny the plan that would lead to waste being shipped though their communities.“

“Exposure to radioactivity can lead to cancers and genetic damage. Accidents could be deadly,” said SEED Coalition Director Karen Hadden. “An unshielded person exposed up close to high-level radioactive waste would die within a week according to the Department of Energy (DOE). There’s no need to risk health and safety across the country just to store radioactive waste in a different place, especially since no permanent repository has been developed. The least risky path is keeping the radioactive waste where it is.”

“We do not consent to the plan to dump dangerous radioactive waste on us,” said Rose Gardner of Eunice, New Mexico, a town of nearly 3000 people that is 40% Hispanic. It lies five miles west of the WCS site. “Andrews County officials say that we want this waste, but no one has ever asked me if I consent. I would definitely say no, and many others here feel the same way. We never got to vote on this issue. The Department of Energy (DOE) is saying that our community consents to having radioactive waste dumped in our backyard, but this isn’t true. The DOE scheduled eight hearings around the country, but not a single one for New Mexico or Texas, the targeted region. Clearly they don’t want to hear our voices.”

“If the Nuclear Regulatory Commission approves WCS’ application it could unleash the world’s largest and most dangerous campaign of nuclear transport on our roads, rails and waterways,” said Diane D’Arrigo, Radioactive Waste Project Director at Nuclear Information and Resource Service (NIRS).

We call this plan “Fukushima Freeways,” after the triple nuclear reactor meltdowns that started five years ago in Japan and continue to hemorrhage radioactive water into the oceans, fish and our food webs.”

Transporting radioactive waste for the purpose of consolidated storage isn’t necessary since the waste can remain secured in dry casks at the site where it was generated, or close nearby and most reactor sites are already licensed to do this.

The DOE previously analyzed accident risks for shipping high-level waste to Yucca Mountain and predicted at least one accident for every 10,000 train shipments. With 10,700 shipments, at least one train accident was anticipated.  Consolidated storage would involve thousands of radioactive waste shipments that would occur over 20 or more years across much of the United States. If transport is mainly by truck, 53,000 shipments with 53 accidents were expected.  They found that a radiation release could render 42 square miles uninhabitable and cost 9.5 billion dollars to raze and rebuild a downtown area.

“If this mass movement of radioactive waste begins, there will be accidents and some of those accidents could release enormous amounts of radioactivity,” said D’Arrigo. “This waste is the hottest, longest-lasting, most intensely radioactive, cancer-causing part of the whole nuclear power fuel chain. It is dangerous now and will still be dangerous in thousands to millions of years. The nuclear industry and government want to pretend there is an answer to the radioactive waste problem and move the waste around, at our peril.”

WCS’ application for consolidated “interim” storage is likely to be for 40 years. The site could easily become a de facto permanent disposal site, without the necessary research and rigorous standards needed to keep radioactive waste isolated for thousands of years.

Former State Representative from Fort Worth Lon Burnam is concerned about water contamination. “The WCS site is supposed to be dry, but their own monitoring well data frequently shows that water is present. The site is very close to the Ogallala (High Plains) Aquifer that provides drinking and irrigation water for eight states in the middle of the U.S. What if the nation’s largest aquifer became contaminated by radioactivity?”

Note: The maps above show likely routes developed based on routes previously designated for shipments to Yucca Mountain.  Please note that AFCI’s project for Loving County is no longer under consideration, although the company may still be looking for a site in Culberson County.