Six years ago, Public Citizen and our partners founded the Healthy Port Communities Coalition (HPCC), which advocates for the health and well-being of residents of communities on the Houston Ship Channel. The coalition also includes Air Alliance Houston, the Coalition of Community Organizations, and Texas Environmental Justice Advocacy Services.

Recently, we had an opportunity to convene the HPCC in Houston to discuss our work. One purpose for the trip was to introduce our new Press Office, Angel Amaya, to Port Houston. Port Houston is the largest exporting port in the nation and the center of Houston’s petrochemical industry. 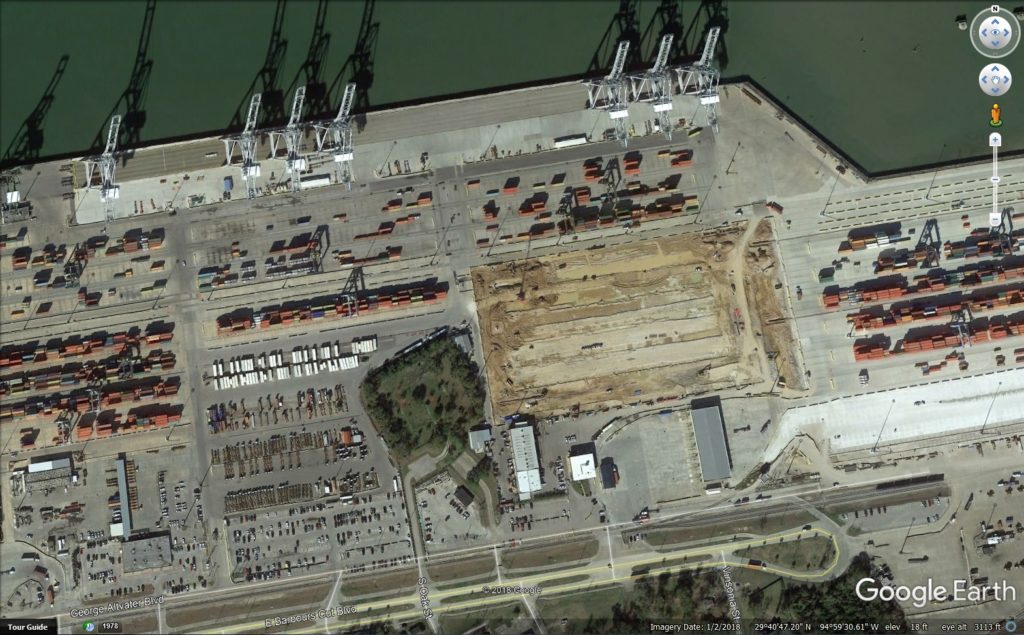 We started at Morgan’s Point Cemetery, the oldest continually operated cemetery in Harris County. It is the small green square in the middle of the photo above. Surrounding the cemetery is the Barbours Cut terminal and turning basin. This is one of two container terminals at Port Houston. Goods from all over the world come into Barbours Cut on very large vessels packed with shipping containers. One ship can carry as many as 4,500 containers. (There are even larger ships, the so-called “Post-Panamax” ships, that can carry as many as 9,000 containers, but they are too large to enter Barbours Cut.) The containers are offloaded by cranes (top of photo) and moved on to trucks and trains to be shipped around the country. Many of the engines that operate at a terminal like Barbours Cut–including marine vessels, cranes, short-haul equipment, drayage trucks, and locomotives–use polluting fossil fuels such as diesel. The Healthy Port Communities coalition advocates for replacement of these polluting vehicles with newer, clean technologies. Many funding opportunities are available for these replacements, including the Diesel Emissions Reduction Act and the Texas Emissions Reduction Plan.

A container terminal like Barbours Cut is probably what most people think of when they think of what goes on at a port. There is plenty of container traffic at Port Houston, but in fact this represents only about 15% of the total traffic.

The rest of the traffic consists of bulk products, most of them petrochemical. We visited many of the industrial facilities that produce these petrochemical products. One of the most infamous petrochemical facilities on the Houston Ship Channel is the Pasadena Refinery, owned by the Brazilian national oil company Petrobras.

Pasadena Refinery is notoriously troubled. In recent years, its woes have included explosions with injury, protests by environmental groups and concerned neighbors, lawsuits by environmental groups, and international bribery scandals. It was recently announced that Petrobras is trying to sell the refinery, although it is unclear who would want to buy such a dangerous liability.

Created by children living in Manchester, the mural perhaps unintentionally shows how intrusive polluting facilities are in the lives of people living on the Houston Ship Channel. An idyllic scene of children playing in a park is flanked by industrial stacks spewing pollution into the air. The mural is a stark reminder of what life is like for some of our most vulnerable neighbors in certain parts of Texas.

The Healthy Port Communities Coalition is advocating on the behalf of those neighbors who live in Houston. We finished our trip to Houston with a meeting of HPCC member groups. One topic of discussion was the Chairman’s Citizens Advisory Council (CCAC). The CCAC was created after the Port of Houston Authority Sunset Review in 2013. Public health advocates had asked for representation on the Port Commission itself, with the addition of a new seat representing community interests. That recommendation was rejected by the state legislature, although certain other reforms were implemented. After the sunset review was complete, some advocates continued to call for more representation of community interests at the port. Longtime port community advocate Sen. John Whitmire joined this call, asking the new Port of Houston Authority Chairman Janice Longoria to act. Chairman Longoria responded by creating the Chairman’s Citizens Advisory Council.

The Healthy Port Communities Coalition has had members and allies on the CCAC since it was created. Although we appreciated the move, in the years following we have not seen the CCAC be an effective body advocating for public health protections. This is in part due to the manner in which it was created and operates. In order to improve the CCAC, we have compiled a list of recommendations:

To her credit, Chairman Longoria did implement #7 above at the request of one of the CCAC members (a t.e.j.a.s. employee). But for the most part, the CCAC still functions as an isolated body whose members serve at the pleasure of the chairman. We believe that the above reforms would make the body a more effective advocate for portside community residents. This would lead to a port that took better care of its neighbors and served as a better steward of public health and the environment.