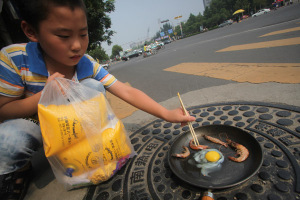 Australia experienced record-breaking temperatures and many other countries are experiencing uncharacteristically intense heat waves. Whether or not these events are related to climate change has been questioned in the past, but has recently come to light as something that is very probable.

The American Meteorological Society recently released a bulletin based off of 22 case studies. It concluded saying that high temperatures made heat waves more intense and more likely and that the emission of greenhouse gases is causing these extreme weather events. Recent heatwaves in Australia, Korea, Japan, China, and Western Europe are all judged to be due to climate change. The National Climate Assessment also made a connection between climate change and the drought in Australia.

Australia experienced its hottest year on record in 2013, with the heat waves sparking several wildfires. Experts predict that the heat waves will continue and the effects will worsen. According to Think Progress, “The State of Australian Cities” predicts the number of heat-related fatalities in Australia’s cities will rise to 2000 by mid-centry, compared to the approximately 500 recorded in 2011. The report found the cities of Brisbane on Australia’s east coast and Perth on the west coast will see the most heat-related deaths, with predictions of nearly 800 in each city by 2050, compared with compared with fewer than 200 in 2011. Sydney could experience close to 350 heat-related deaths by 2050, compared to about 70 in 2011.”

Japan also hit its hottest day ever in 2013 at 106 degrees Fahrenheit, necessitating heat warnings in 38 of the country’s 47 prefectures. The country reported 52 deaths from heatstroke with nearly one third of them occurring in one week. South Korea also experienced its hottest day in a decade at 102.6 degrees Fahrenheit, driving up electric demand. The government ordered air conditioning to be turned off in public institutions and limited the subway service to avoid a nationwide blackout. Western Europe also experienced a hot and dry summer, with temperatures exceeding 104 degrees Fahrenheit. These heat waves sparked multiple wildfires, challenging the country’s resources.

To study these changes, scientists run climate models. These computer models divide the atmosphere into small grid cells and solve the equations of mathematical theory that show how the atmosphere should behave on each of those little grid cells by going through time with the expected concentrations of heat-trapping gases like carbon dioxide. Researchers can run the model with the atmosphere expected to exist 100 years ago, before we started putting so much CO2 in the air, and compare it to the atmosphere now to see how much humans have impacted the flow of climate.

Director of Meteorology at Weatherunderground.com Jeff Massers explained the science behind storms that have been caused by climate change,

With heavy precipitation events it’s more complicated because you’re heating up the oceans, causing more evaporation, and driving more moisture in the air which could cause more intense heavy rainfall events. You’re changing the nature with which storms form, and you’re changing the Jetstream that storms follow so it gets pretty complicated.

Luckily, computer models are getting more powerful and researchers are to subdivide the atmosphere into grids that are finer and finer. Though awareness of human impact came late, technology is becoming a better tool to understand what is happening to the atmosphere and how it affects climate and weather.