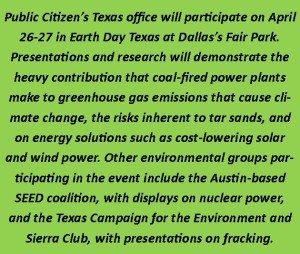 “Even Citigroup is climbing on the renewables bandwagon,” said Tom “Smitty” Smith, director of Public Citizen’s Texas office. “The company says that the ‘Age of Renewables’ is upon us.”

Smith quoted a recent Citigroup analysis, which said that solar, wind and other renewable energy sources are becoming cost-competitive as gas prices remain high and volatile. The report also predicted that renewables will continue to gain market share from nuclear and coal power.

Study after study has shown there is serious methane leakage during the process of drilling, fracking and processing natural gas and oil,” said Cyrus Reed, Conservation Director of the Lone Star Chapter of Sierra Club. “Methane emissions are cooking our climate, and they are a public health threat. The Texas Commission on Environmental Quality, the Railroad Commission and ultimately the Legislature need to step up and adopt tough regulations, inspections and enforcement to prevent methane emissions.”

Last week, the International Panel on Climate Change, the U.N. panel of hundreds of climate scientists, issued its fifth and most dire report, warning that greenhouse gas emissions are rising faster than ever. The report said that only concerted action to bring down emissions in the next 15 years will keep global warming to the level the international community has agreed to – an average 3.6 degrees above preindustrial temperatures.

But it also said renewable energy is an increasingly feasible and affordable alternative to fossil fuel-generated power, the culprit in rising greenhouse gas emissions. Renewable energy technologies have shown “substantial improvements,” “cost reductions” and the ability to be deployed “at significant scale,” according to the report. They also have “accounted for just over half of the new electricity generating capacity added globally in 2012, led by growth in wind, hydro and solar power.”

“Texas gets more power from wind than any other state in the nation,” Smith said. “Our climate makes solar power ideal. We need to take advantage of our natural ability to lead the nation in reducing the severity of the coming crisis.”

Texas’s wind farms already have generated as much as 38 percent of the electrical power on the ERCOT grid, according to a recent media report. That reflects the highest power output by wind turbines in the country.

Although Texas is rich in solar resources, it lags behind other states in solar-generated power, in part because the state legislature has not supplied the kind of incentives provided to the fossil fuel industry. Texas ranks 13th in the nation for the amount of power generated by solar, according to the Solar Energy Industries Association (http://www.seia.org/state-solar-policy/texas).

Austin Energy, though, just agreed to what the Austin-American Statesman described as one of the largest solar projects in the world, which will more than double the solar capacity in Austin. The article pointed out that Austin Energy’s contract with Sun Edison is inexpensive – about 4.8 cents per kilowatt-hour for electricity coming from two West Texas sites.

Texas is the No. 1 contributor of greenhouse gases in the nation. Texas emitted nearly 450 million metric tons of carbon dioxide in 2012, according to the most recent EPA statistics. The next highest contributor, Indiana, generated about 150 million metric tons in 2012. Earlier this year, Texas Gov. Rick Perry also proposed that Texas agree to take high-level radioactive waste from the Los Alamos national Laboratory in New Mexico.

“Gov. Perry’s proposal means a high level of risk for the state and its taxpayers,” said Karen Hadden, executive director of the Austin-based SEED Coalition. “Short-term exposure to waste can cause death, cancer, or birth defects. Almost every other state that has looked at this kind of proposal has said it is too risky and turned it away at the border.”

Smith added, “Texas faces both calamity and great possibility. More than most states, Texas is looking at catastrophic impacts from climate change. We’re already experiencing historic drought that has wreaked havoc on communities, businesses and the economy. But more than most states, we’re also in a position to reverse our reliance on the energy sources that cause climate change.”