The Electric Reliability Council of Texas (ERCOT), the operators of the Texas electric grid, has released its Emerging technologies report that includes the state of renewables on the Texas grid.

Some interesting facts show that wind generation continues to provide a significant amount of energy to the grid as the technology matures, new turbines are developed and better tools are put in place to maximize the turbines generation. The effects of the CREZ (certified renewable energy zone) transmission line build out are starting to be seen as congestion from wind rich west Texas is reduced and more energy is being able to be delivered to the major urban ares. The report shows that wind generation provided 9.9% of the total energy used from January thru June of this year.

Other good news is that the capacity factor (100% capacity factor would be a perfect generator running flat out all of the time all 8760 hours of the year) for the wind fleet has now reached 38.3%  and continues to increase, that’s better than a lot of natural gas plants.

The amount of wind produced energy continues to increase and the new coastal wind farms have been a major contributor.  According to the CEO of ERCOT wind has saved us a couple of times this year. Back during the February 3rd rolling blackouts the wind farms played a large roll in keeping the grid running when the aging fleet of fossil fuel generators, along with some brand new ones, failed in the cold.  Then during the current heat wave, the coastal wind farms supplied around 2000 mw of much needed energy during one of the highest energy demand days, keeping the lights on. Perhaps the PUC should start paying more attention and let us add some solar to the mix instead of letting the 500mw non-wind project expire as they did.

Recently San Antonio put out a request for a large solar project and was bombarded with proposals.  ERCOT then announced they are planning to un-mothball several old gas plants just in case we run short on energy again.  It’s the same thing we saw during the legislative session – the fossil fuel companies got to keep billions in tax breaks but solar didn’t get a dime.   Now the PUC is having a meeting (August 22nd) on how they can “fix” the market to get more generation built when they already have the tools and the opportunity staring them in the face.

During a recent ERCOT meeting held at the peak of the energy demand, I over heard folks saying how “it sure would be nice to have some more solar on the system.” Perhaps the politicians should get out of the way and let the engineers do their job.   The public power utilities (municipally owned and rural electric cooperatives) are leading the way.  San Antonio is looking to build 400mw utility scale solar, Austins 30mw Webberville project moving along and several other Munis and Co-ops looking to build solar projects.  But where is the much vaunted deregulated energy market when we need them?  Relying on 30-50years old smelly, toxin spewing existing fleets – or business as usual.

As Texas bakes in the the record summer heat wave and our scarce water resources are being sucked up by traditional power plants ( a typical coal plant can use 10 million gallons of water a day) low impact non polluting energy sources are being allowed to languish on the sidelines. Its time to get with it, and bring some new industries, more jobs and clean renewable energy to the Texas grid to keep the lights on and meet the EPA regulations for clean air and water for us and our children to enjoy. Companies want to build 3000 MW of offshore wind beyond the barrier islands south of Corpus Christi, and there is a 10,000 mw farm that is in the plans to be built up in the Panhandle.

To paraphrase, the answer my friends truly seems to be blowing in the wind, just as the sun comes up every morning. 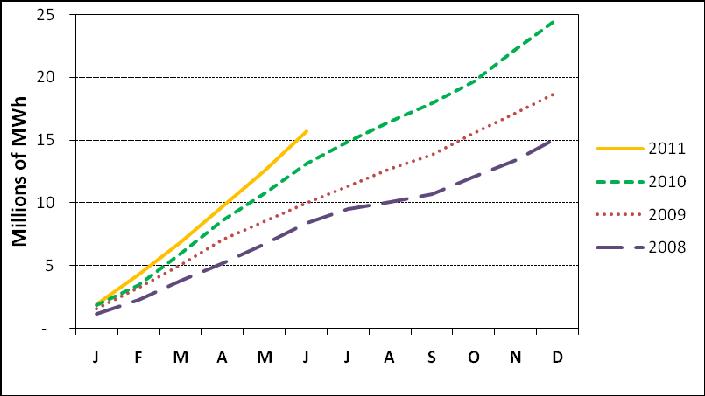