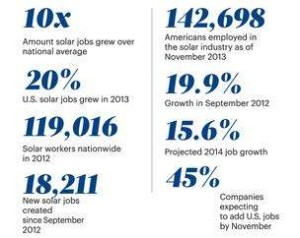 A recent report by the Solar Foundation shows that employment in the solar industry is booming. Over the past four years, employment in the nation’s solar companies has grown by about 53%. The number of solar jobs grew by an astonishing 20% between 2012 and 2013 alone. By contrast, the overall economy created only 1.9% more jobs over the same period of time. Texas has 4,100 employees in the solar industry, and experienced a 28% growth in solar jobs from 2012 to 2013. Texas is in 6th place for total number of solar employees.

Of the jobs created in the solar industry, sales and installations are leading the way. Within the next year, jobs installing panels are expected to grow by 21.4%, while sales jobs are expected to grow by 14.1%. However, jobs in the solar manufacturing sector are projected to grow only by 8.6%, as U.S manufacturers struggle to compete with cheap panels from China and other developing markets. In response the U.S has imposed a 31% tariff on imported Chinese solar panels. Still, even the slowest growing sector in the solar industry is creating jobs four times faster than the overall economy. The solar industry is truly one of the great success stories of the economic recovery. 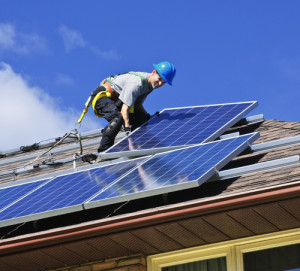 It’s important to note that one thing driving panel prices down so rapidly, and creating a ton of jobs in the process, is the increased demand being created from the solar subsidies at the various levels of government. If these subsidies are ended prematurely, solar panels would be out of reach for many consumers, resulting in a reduction in demand. If this happens, the reduced demand could slow jobs growth.

In order to keep the solar industry going strong and creating jobs, clear guidance on the federal level surrounding renewable energy subsidies is needed. For example, the solar investment tax credit, which has helped spark the economic boom in solar, is set to expire at the end of 2016. This tax credit has played a key role in fostering the 1,600% increase in solar installations since 2006. In fact subsidized solar power has already reached grid parity in some states. That means that on a kilowatt-hour (kwh) basis, solar can be as cheap as or cheaper than coal, natural gas, or any other conventional form of energy. In states or cities where solar reaches grid parity, observers are expecting an even further surge in solar energy, yielding even more jobs growth. But if the solar investment tax credit completely expires for residential customers and is reduced to 10% for commercial customers, as scheduled, in 2016, jobs growth in the solar industry could slow unless soft cost are reduced . Any reduction in subsides should be offset with a reduction in the required permitting and paper work for solar installation. These soft costs related to regulatory compliance cause solar installation to cost nearly twice as much as they do in other countries. In Germany, where the solar instillation process is stream lined, a 4kw system costs only $10,000 to install, where the same system costs nearly $20,000 in the United States.

As of right now, solar appears to be entering a period of nearly exponential growth thanks to falling panel prices, and effective subsidies at the various levels of government. While every industry should aspire to be able to stand on its own two feet, ending the subsidies for solar in 2016 would be premature and would put the industry at a disadvantage among the many energy industries, including coal, natural gas and nuclear, that receive other subsidies. Any reduction in subsidies should be offset by making the regulatory process simpler, and cheaper. The solar industry is one of the fastest growing industries around, and until solar can consistently reach grid parity, subsidies should kept in place to ensure strong jobs growth, and a bright future for the green U.S economy.