TransCanada is attempting to outsmart the State Department and bypass federal blocks by using two existing pipelines of poison after the State Department and President Obama delayed approval of the Keystone XL Pipeline permit amidst concerns about bias, conflicts of interest, and environmental issues,  If implemented the pipeline of poison will pose serious threats to Texas water resources that supply 12 million in East Texas and the Dallas/Fort Worth and Houston metropolises, and our climate.  The groups are urging Texans to contact their local and state officials and ask them to stop the pipelines of poison.

“TransCanada is attempting to mislead the public and circumvent the regulatory mandates of Presidential approval, environmental review and public participation,” said Tom “Smitty” Smith, director of the Texas office of Public Citizen.  “They are now proposing to connect their Gulf Coast Segment (from Cushing, OK to Port Arthur and Houston, TX) into the end of their existing Keystone 1 pipeline.  Make that foreign tar sands corporations – 1: the United States – 0.”

“We also believe that Enbridge also plans to do the same by connecting their proposed Wrangler pipeline that runs from Cushing, OK to Houston TX to their existing Spearhead pipeline system that runs from Canada to Cushing, OK. It would be a serious mistake to allow these pipelines to carry toxic tar sands across Texas land,” continued Smith.

These two pipelines of poison – TransCanada’s Gulf Coast Segment and Enbridge’s Wrangler – would pose serious threats to Texas water resources, including aquifers, drinking and agricultural water resources for up to 12 million Texans in Dallas, Houston and East Texas. 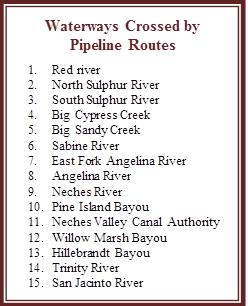 TransCanada’s pipeline would cross the Carrizo-Wilcox Aquifer, the Trinity Aquifer and the Gulf Coast Aquifer.  It would traverse 16 large rivers several of which are listed as sensitive and protected, and cross over more than 130 designated floodplain areas in Texas.  These rivers and drainages feed 21 lakes and municipal reservoirs, including Pat Mayse Lake, Lake Tyler and Lake Cypress Springs.

“TransCanada’s Keystone 1 pipeline has already leaked 14 times in its first year,” said Chris Wilson, a chemical engineering consultant for opponents of the pipeline.  “How can we trust them to build it better and not endanger the waterways in Texas?”

In 2011, one of Enbridge’s pipelines leaked over 1 million gallons of tar sands into the Kalamazoo River in Michigan.  Clean-up efforts have cost over $700 million, it’s still not cleaned-up and people and animals are sick and communities are poisoned.

“Sadly, this is what happens when there are no federal pipeline safety regulations and effective cleanup procedure for toxic tar sands spills,” continued Ms. Wilson.  “Tar sands are not like crude oil which floats on water, they are heavier and they sink, making cleanup much more difficult if not impossible.  Congress should protect the public and put an immediate halt on all tar sands pipelines until studies are completed, safety regulations are enacted and effective spill remediation procedures are put in place.”

Other Threats to Texas

“Despite the fact that TransCanada and Enbridge imply that they might not have to undergo environmental review our analysis has identified several major environmental hazards and key red flags to the project that are cause for concern and require addressing,” said Karen Hadden, Executive Director of the Sustainable Energy and Economic Development (SEED) Coalition.  “These include:

Threats to the Health of Texans

The crude oil that would flow through the pipeline is known as diluted bitumen, or dilbit.  Federal safety officials don’t know precisely which chemicals TransCanada mixes with bitumen to create dilbit, including the levels of benzene used in the diluents. And even industry groups can’t say exactly how corrosive dilbit is.

“The U.S. EPA raised serious health risks over benzene in the diluents in a June 2011 letter to the U.S. State Department based on ambient air data at the Kalamazoo river spill”, stated Dr. Neil Carman, Clean Air Program Director of the Sierra Club Lone Star Chapter.  “In a tar sands pipeline spill Benzene easily volatilizes into the air at ambient temperatures allowing inhalation exposure to occur, its toxicity results in immediate health effects in the low parts per billion range.  Benzene also poses a water contamination risk at low concentrations.”

“These characteristics make benzene the most dangerous chemical to human health in a tar sands pipeline spill because it is a known human carcinogenic agent,” Carman emphasized.  “Short-term benzene exposures may cause a variety of health effects, including nausea, vomiting, dizziness, narcosis, reduction in blood pressure, and central nervous system depression as reported in Michigan from the Kalamazoo tar sands spill in July 2010 where high levels (15,000 parts per billion) were measured in the air.”

Finally, Carman noted that, “Tar sands bitumen contains 11X more sulfur and nickel, 5X more lead, and higher levels of other toxic substances (arsenic, chromium, vanadium, boron, and zinc) compared to conventional crude oil.”  Carman concluded, “The higher toxicity of tar sands bitumen will result in increased toxic emissions in refinery communities already overburdened with too much air pollution where environmental justice issues have been ignored by the state and the oil firms.”

NASA’s James Hansen, a leading climate scientist who rang the first alarm bells nearly 30 years ago, has called the Keystone XL tar sands pipeline “game over” for the climate.

“The DFW area won’t fare much better as pumps are situated at 20- to 100-mile-intervals along the length of the pipeline to “push” the tar sands crude,” continued Smith. “Pipeline pumps may be powered by burning diesel or natural gas, or by using electricity (which may come from burning natural gas or coal at power plants that feed the area).  This will add to the emissions blowing into the DFW area.”

What Can Be Done If Foreign Corporations Circumvent U.S. Regulatory Process

Texans should contact their elected officials regarding their concerns about TransCanada’s Gulf Coast and Enbridge’s Wrangler proposed tar sands pipelines and they should ask their elected officials to join together to protect Texans from the dangers of toxic tar sands pipeline spills and impacts to end-of-market refinery communities.  The Texas Legislature needs to study tar sands, hold interim hearing about tar sands and work together with their constituents to assure that Texans water, air, land and health are not harmed by toxic tar sands.