In May 2017, I Showed Up at Houston’s City Council Meeting With a Request: A Climate Action Plan for the City. 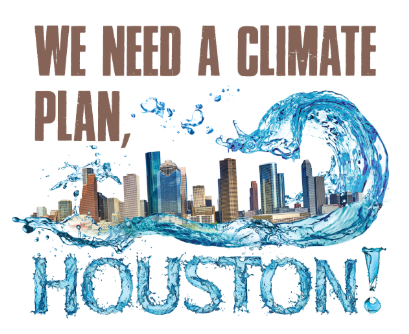 HOUSTON – In May 2017, I showed up at Houston’s City Council meeting with a request: a climate action plan for the city.

In mid-2018, Mayor Sylvester Turner agreed to create the plan. As a member of the Climate Mayors, Mayor Turner has committed the City of Houston to meeting the goals of the Paris Climate Agreement. And now, the City of Houston has a draft climate action plan that is currently open to public comment through August 31st.

the city undertook an emissions inventory using 2014 data. The city found that in 2014, 34.3 million metric tonnes of carbon dioxide equivalent (CO2e) were emitted. Of those emissions, 47% came from transportation, 49% came from commercial and residential buildings, and 4% came from manufacturing, waste, and fugitive emissions.

Houston is second only to Pittsburgh in per capita emissions, with 14.9 metric tonnes of CO2e per person. And if the Port and Ship Channel had been included, it’s easy to see how we might be number one. And that’s not how we want Houston to lead!

What is the City Focusing On?

This plan focuses largely on emissions reductions. It is not a climate resiliency plan, which can help Houston adapt to a warmer world and all of the climatic repercussions, such as heat, drought, and more intense rainfall. Those elements are being examined as part of the City’s Resiliency Plan.

One of the challenges of the climate action plan is the numerous stakeholders that need to be on board. These include Houston METRO, the Houston-Galveston Area Council, state agencies like the Texas Department of Transportation, the private sector, and the community.

One thing the Climate Action Plan is missing is a clear demonstration of how its goals comply with the Paris Climate Agreement.

Mayor Turner committed to upholding the Paris Climate Agreement, which would limit warming to under 2°C. But that’s not good enough. More recent reports highlight that we need even more aggressive climate action to limit warming to 1.5°C–with most emissions reductions coming in the next decade or so. An ambitious emissions reduction strategy between 2020 and 2030 will help set the city on course to appropriately reduce emissions.

Furthermore, the city should set biennial emissions reductions targets and track progress toward these targets with updates to the emissions inventory. If you have a fitness app monitoring your daily progress and exercise habits, then you know how useful constant monitoring and feedback are in changing behavior. Consistently and systematically reviewing progress will help the city keep on course.

Email Mayor Turner and Houston’s Chief Sustainability Officer to ask for more ambitious near-term emissions reductions that will meet the goals of the Paris Climate Agreement.

And keep the heat on the city to move forward with climate action. Houston is vulnerable and as Houstonians we need to come together to protect our city from climate disasters by aggressively tackling our emissions.