Are small earthquakes associated with hydraulic fracturing for gas?  Recent quakes in Ohio and Arkansas have taken many people by surprise, including a 2.7-magnitude earthquake that rocked Ohio on Christmas Eve, followed by a  4.0-magnitude quake on New Year’s Eve bringing the total to nine last year.  All of the quakes were recorded within a 5-mile radius of a hydrolic fracturing wastewater injection well. 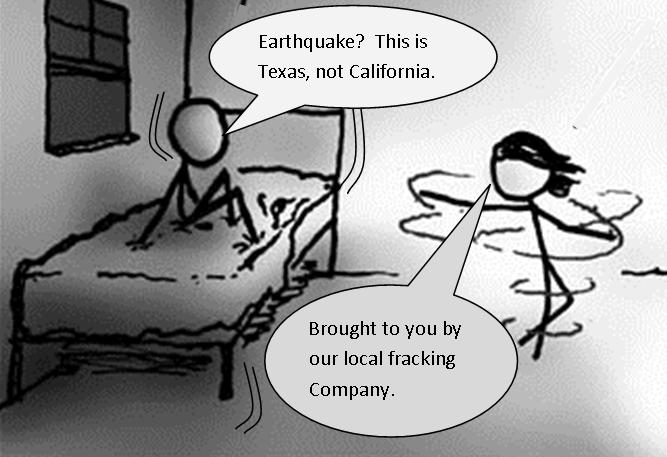 Gas industry executives say there’s no hard evidence that their activities are causing these quakes. But some scientists say it’s certainly possible and have found that pumping water away from underground mines (to keep them from flooding) changes the dynamics of stress in rock formations enough to trigger a quake.

Some rock is saturated with water — the water occupies pores between rock particles. This creates what’s called “pore pressure” and keeps the formation in a sort of equilibrium. If you suck the water out, particles tend to collapse in on themselves: the rock compresses. Add water, and you push particles apart. So moving water around underground can affect the stresses on those formations.

Hydraulic fracturing pumps a lot of water underground, where it’s used to crack the rock and liberate gas. This may cause tiny quakes, but fracking goes on for a day or two, and the quakes are small.  But the recent quakes reported in Ohio and Arkansas are associated with the waste-water wells used to dispose of the fracking water, not the fracking wells. The water first used in fracturing rock is retrieved and pumped into these waste wells under high pressure and as much as 9,000 feet deep. It’s this pressure that can actually create earthquakes.

A few geologists are familiar with these induced or triggered quakes. They’re rare and usually small, but now fracking is creating thousands of waste-water wells, often in heavily populated areas that historically have not been seismically active. That means even small quakes get noticed.

We could avoid creating earthquakes by recycling the fracking waste-water rather than injecting into waste wells, however when the state of Pennsylvania tried it they found that waste-water treatment plants couldn’t get all the toxic material out of fracking water, and the “cleaned up” water returned to rivers wasn’t clean enough. So now they ship it to to Ohio, where there is a more relaxed regulatory environment.

The U.S. Geological Survey (USGS) is working on ways to head off quakes from waste-water wells by performing seismic surveys before drilling the wells or limiting the amount of water going into wells.  USGS geologists have learned that the more water injected, the bigger an ensuing quake.