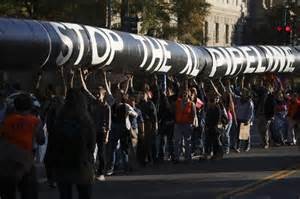 According to a press release by NRDC and Oil Change International, new data released by the U.S. Energy Information Administration (EIA) proves that, as President Obama has emphasized in recent comments, the proposed Keystone XL tar sands pipeline would serve primarily as an export pipeline, bringing dirty Canadian tar sands crude to the international market.

The Energy Information Administration (EIA) says refineries in Port Arthur and Houston, which would be the primary recipients of crude oil delivered by the Keystone XL pipeline, have exported a growing share of their refined products over the last two years. In 2013, the percentage of product exported was 55%; in 2014 it was up to 60%, and by December of last year it was up to over 66%.

But as Politico’s Elana Schor notes, “That ‘Fact Checker’ piece, however, largely addressed the export prospects of Keystone’s unprocessed heavy crude. On the question of whether the refined products generated by the pipeline’s oil would be sold overseas, it cited only a report by IHS, a consulting firm frequently hired by the industry.”

The oil industry and their allies can push out all the talking points they want about energy security, but the facts are clear: Keystone XL is an export pipeline, and would bring plenty of risks but no rewards for the American people.