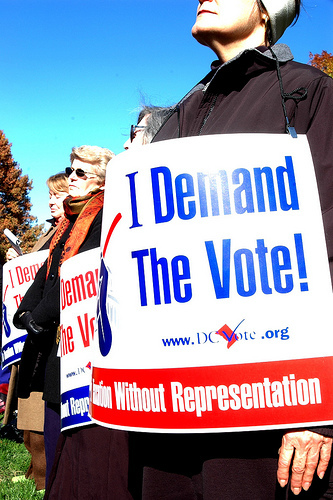 You can march off to battle,

But steer clear of the polls.

Fight for us, die for us

but don’t forget your role.

– from “The New Cadence” by Estilito Diaz

Unlike previous rallies in support of D.C. voting rights,

the one today in front of the U.S. Capitol was different. There was a

Congress might be gaining momentum. As people all over the country are

It doesn’t hurt that the D.C. Voting Rights Act has supporters in

the act, D.C.’s Delegate to the House of Representatives, Eleanor

Holmes Norton, told the supporters gathered for the Veteran’s Day

Speakers included D.C. military veterans who spoke about serving in

defense of the country while being denied full representation before

recital of his poem, “The New Cadence,” which he wrote the day before.

Some people in the activist community say with the shift in

political power, the District should seek more than a single seat in

Congress. Some say it’s time to push for full statehood or at least two

full seats in the House.

Congress Watch division, says activists should focus on achieving the

first step of creating a Congressional district for D.C.

been trying to get passed for years,” she said. “Let’s get our seat at

the table then we can turn to other, bigger goals.”

You can show your support for D.C. residents and the D.C. Voting Rights Act by writing your member of Congress. U.S. Treasury Report to Congress on Trade Partners’ Currency Practices Will Once Again Fall Short of Its Mandate