When the welcome bags for the 2008 DNC national party convention were revealed earlier this month, bloggers took notice. Why? Because the bags are covered in corporate logos.

points out, the national party is making little effort to conceal which

companies are financing the convention, instead placing their logos 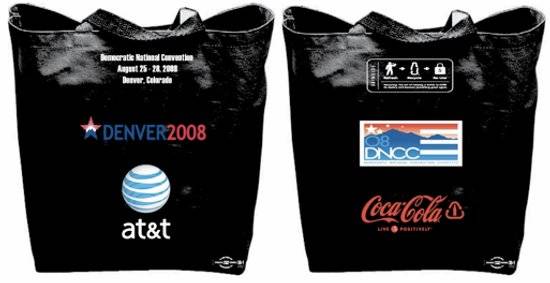 But the benefits of corporate sponsorship

go well beyond prominent advertising on welcome bags. A quick look at

the sponsorship packets that the host committees give to possible

sponsors betrays the true purpose of corporate sponsorship – a

guarantee that big-money contributors will have special access to

elected officials attending the conventions. The fact that corporate

donors have been so reluctant to disclose the exact amount of their contributions further suggests that their interest in sponsorship is far from benevolent.

(CFI) has reported that the original Minneapolis St. Paul host

leadership, in addition to a reception with local party officials and

in local and national media, the fact remains that the primary benefit

that host committees offer to corporate sponsors is exclusive access to

decision makers. To ensure that ordinary voters have a voice at the

conventions, Congress must act to close the conventions soft-money

Learn more about corporate sponsorship of the conventions and take action today!

Time to Put an End to the Paper Chase

Lobbyists Trying to Hide in Plain Sight at the DNC