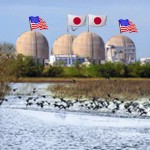 In September 2012, the Nuclear Regulatory Commission denied an operating license to Unistar Nuclear Energy for its planned third reactor at Calvert Cliffs in Maryland because it is fully owned by France’s Électricité de France (EDF)-a foreign entity. Federal law prohibits a foreign entity from completely owning or controlling a U.S. nuclear plant. The company was given 60 days to find a U.S. partner, which it has been unable to do in the past two years, and if it fails to do so the license application will be fully terminated.

Federal law is clear that foreign controlled corporations are not eligible to apply for a license to build and operate nuclear power plants. The evidence is that Toshiba is in control of the project and this precludes obtaining an NRC license for South Texas Project 3 & 4.

While foreign investment in U.S nuclear projects is not prohibited; Toshiba is paying all the bills for the proposed STP 3 & 4 project. This makes it difficult to accept that Toshiba doesn’t control the project.

Toshiba North America Engineering, or TANE, has assumed exclusive, principal funding authority for the project, but they are a wholly owned subsidiary of Toshiba America, Inc, a Japanese corporation. Public Citizen contends that this makes them ineligible for licensing.

How did foreign ownership become a problem? New Jersey based NRG announced on April 19, 2011 that it would write down its investment in the development of South Texas Project units 3 & 4. Engineering work and pre-construction activities were halted, and NRG stated that Toshiba North America Engineering – TANE – would be responsible for funding ongoing costs to continue the licensing process.

The upcoming hearing will deal, in part with the issue of STP’s foreign control.

The Atomic Safety and Licensing Board (ASLB) has rescheduled to Jan. 6, 2014, a hearing in Houston involving an application to build two new reactors at the South Texas Project site near Bay City, Texas. The ASLB is the independent body within the Nuclear Regulatory Commission that conducts adjudicatory hearings and renders decisions on legal challenges to licensing actions.

The hearing will start at 9:00 a.m. CST on Monday, January 6, in Room 425 of the Fourteenth Court of Appeals, 301 Fannin St. in Houston. The hearing will continue on January 7 until noon, if necessary. Members of the public and media are welcome to observe the evidentiary hearing, but participation in the hearing will be limited to the parties and their lawyers and witnesses. Those planning to attend the evidentiary hearing should arrive at least 15 minutes early to allow time for security screening, including searches of hand-carried items such as briefcases or backpacks. No signs will be permitted in the courtroom.

Texas Railroad Commission jumping into the discussion about the rolling blackouts.