If you felt like 2015 was exceptionally warmer than usual, you weren’t alone. Last month, scientists declared 2015 the hottest year on record. Some of this heat can be attributed to the El Niño weather pattern releasing heat from the Pacific Ocean into the atmosphere, but most of the record-breaking heat is from climate changes caused by human-related greenhouse gas emissions.

NASA, the National Aeronautics Space Administration, and NOAA, the National Oceanic and Atmospheric Administration, both collected data that showed that 2015 was between 0.23-0.29 degrees Fahrenheit hotter than 2014. This number may seem small and insignificant, but in terms of global temperature, it’s a big deal.  Thomas Karl, director of NOAA’s National Centers for Environmental Information emphasized that point:

This record, we literally smashed. It was over a quarter of a degree Fahrenheit, and that’s a lot for the global temperature.

In comparison to average temperatures in the 20th century, and not just 2014, 2015 was 1.62 degrees Fahrenheit higher. 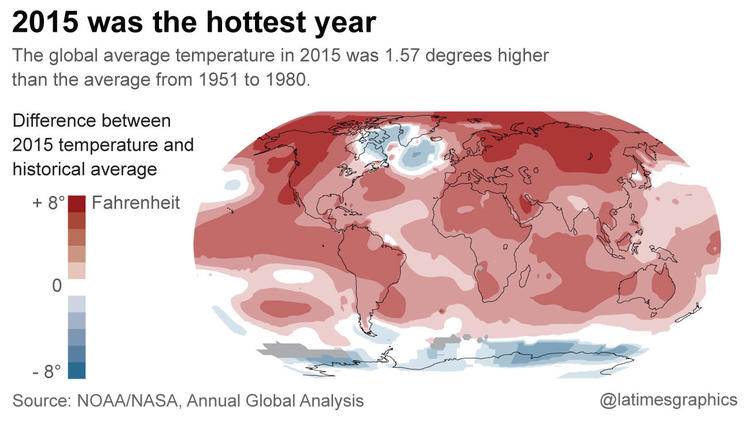 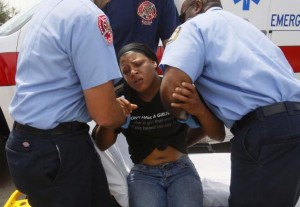 The severe heat last year was felt around the world. There were record-high temperatures in the triple digits across Europe in June and July in Spain, Portugal, France, the U.K., Germany, and Poland. In May, India experienced 120 degree days that melted the asphalt, killing 2,500 people. In June, 1,200 people died in Pakistan after temperatures reached 113 degrees. When the atmosphere is warmer, it can hold more water vapor, which can cause an increase in heavy rains. The recent catastrophic floods in the eastern U.S. are evidence of this. El Niño is also disturbing atmosphere circulation which is causing some worldwide weather extremes like the drought in southern Africa.

So how will Texas be affected by this global climate change? With its location and vast size, Texas has a wide range of vulnerabilities to the effects of climate change. A study done by the Risky Business Project found that Texas will be one of the states that is most negatively affected by climate change. 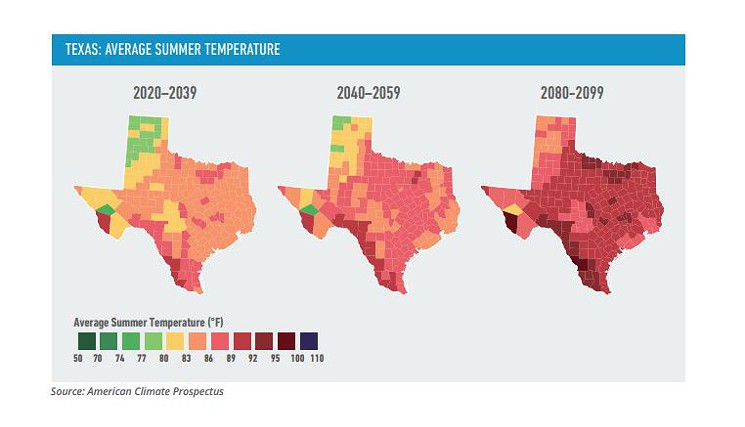 The Risky Business Project’s mission is to convince business leaders in Texas that climate change is a true risk. This will not be easy since Texas lawmakers routinely dismiss climate change. Regarding the news that 2015 was the hottest year, NASA head Charles Bolden said, “This announcement is a key data point that should make policymakers stand up and take notice – now is the time to act.” That it is, Bolden.