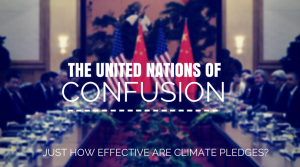 Despite year after year of United Nations talks on climate change, there is still no comprehensive plan. This policy vacuum is leading to an incomplete patchwork of pledges and policies. The United States, Mexico, the European Union, Switzerland, Norway, and Gabon have made climate action pledges. France also continues its ban of cars in attempts to clean the air. However, on the flip side, Japan is giving its money to coal-fired power plants in numerous countries, claiming that it is for “climate finance”.

This raises some questions: How effective are these climate talks and pledges anyway? Are they really helping the global environment? And what happens when countries like Japan move in the opposite direction?

The upsurge of climate activities started when Mexico became the first country to make its climate pledge in 2015, prior to the United Nations climate talks later on this year. The announcement came as a surprise to all, but Mexico started a precedent for other nations. In its pledge, Mexico expressed its plan to decrease its greenhouse emissions by 25% by 2030. Mexico’s plans are ambitious, as the profoundly oil-producing and heavily manufacturing nation wants its greenhouse gas emissions to peak in 2026 and hopes to help establish an international carbon price. Even China, which announced a plan to make emissions cuts back in 2014, and had a year to get ahead, has a goal for its peak year to be 2030. While this is a momentous step in climate change, it will be interesting to see how Mexico commits to the pledge in the upcoming years.

On March 31st, President Barack Obama followed Mexico by pledging to make emission cuts in the United States. The United States has pledged to reduce emissions between 26 and 28 percent from 2005 levels by 2025. This year, the United States joined forces with Mexico, hoping to work together on a variety of climate solutions, including clean electricity.

Environmentalists praised Mexico and the United States for their ambitious plans, but will they lead to decreasing greenhouse gas emissions to a level that will result in the warming of 2 degrees Celsius or less? Having only a few countries commit to limiting emissions will be ineffective – all of the major greenhouse gas contributors will have to participate to stop the most catastrophic warming. Scientific evidence shows that limiting warming to 2 degrees Celsius is already impossible, but every bit of warming above that mark puts our planet in worse danger.

Committing is one thing, but action is another. China, Mexico and the U.S.’s climate pledges will only matter if they result in swift and effective action.

It is unclear if there really is a global effort or ability to combat climate change, when there are situations such as the ones in Japan, who has been investing in “climate finance”. What “climate finance” means to the Japanese government is investing in Indonesian coal-fired power plants. Japan’s environmental agenda remains unclear because although it is providing Indonesia money for its coal plants, it states that the money is used to “address the problem of climate change, through measures to either mitigate it (i.e. emit less carbon dioxide from power plants). Japan states that their investment will help developing countries protect themselves from climate change, but there is no guarantee as to what the developing countries actually do with the coal-fired power plants.

Through the different environmental approaches countries worldwide have taken, it is clear that there is not international consensus about the specific details that climate pledges should include and what is considered beneficial to the climate. For example, is “climate finance” a solution? The public may support these climate change pledges, but these promises remain only promises if there is no plan that incorporates all of the major climate change contributors and address the concerns of developing countries that do not have the sufficient funds ore equipment to combat climate change. Combating climate change is a global effort.